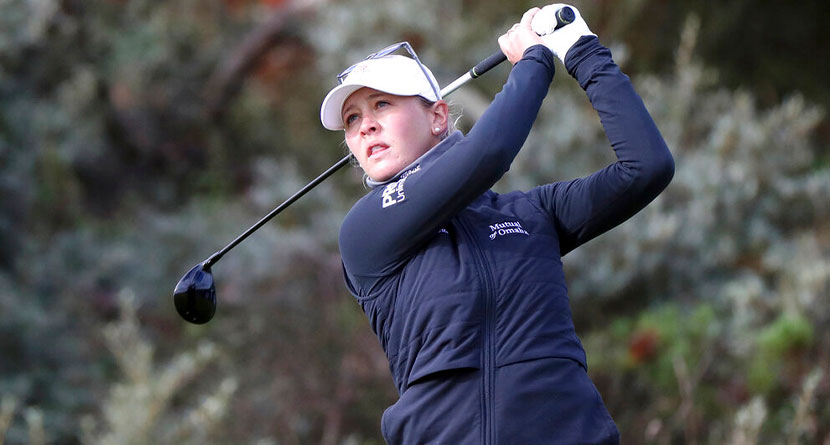 Still waiting for her suitcase to arrive in Muirfield, Korda recovered from an early bogey to shoot a 5-under 66 in the first round Thursday, putting her one shot behind leader Hinako Shibuno of Japan.

Korda made four birdies and an eagle on the 17th despite missing her normal clothes after her luggage got stuck at an airport in Switzerland.

“If anyone knows anyone at the Zurich airport that would like to put my suitcase on the one flight a day that they have coming into Edinburgh, I’d deeply appreciate it,” Korda said. “I know where it is, I have an air tag on it. I can’t get anyone to actually go get it. … Monday I wore Megan Khang’s pants. Tuesday, I wore my sister’s pants and Wednesday I wore Alison Lee’s pants. Today I’m wearing FootJoy pants.”

Shibuno, the 2019 champion, made birdies on the first three holes and went on to card eight in total in her 65. Scotland’s Louise Duncan and Mexico’s Gabby Lopez were tied for third, two shots back.

“It has been a long time since I’ve played this well, especially putting. Honestly it was a little frightening,” Shibuno said through an interpreter. “I haven’t changed much. My caddie told me that my body balance was off when I was missing putts. Once I focused on this, I could play much better.”

Nelly Korda, Jessica’s sister, was tied for 13th after shooting a 70.

Catriona Matthew, also a former Women’s British Open champion and two-time winning captain in the Solheim Cup, was selected to hit the opening tee shot Thursday after growing up close to Muirfield, which is hosting the event for the first time. It was only six years ago that Muirfield didn’t allow women to even set foot in the clubhouse.

Matthew struggled to a 5-over 76, making double bogeys on the first and 10th and failing to make a single birdie.

“Being the first women’s pro event to be played here, it’s great, and me being local it was a huge honor to hit the first tee shot,” Matthew said. “Apart from the two doubles I actually played quite well. It’s a little frustrating.”