In-Course O.B. Dooms McIlroy’s Round At The Start 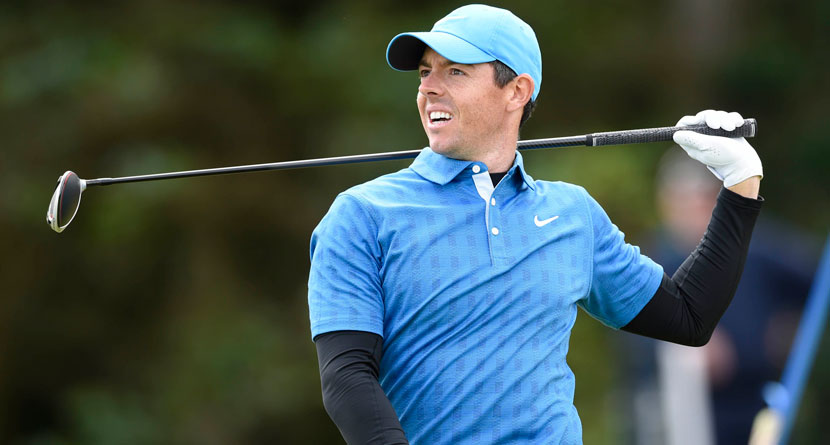 Rory McIlroy’s first Open Championship round in his home country of Northern Ireland was over nearly as soon as it started thanks to a nervy tee shot that found the controversial in-course out of bounds left of the first fairway.

In an ode to the history of Royal Portrush, the R&A decided to keep the expanse of perfectly playable land outside the field of play.

“The reason for this is if you go back in history, the club did not own that land,” Martin Slumbers, chief executive of the R&A, said. “And so it was somebody else’s land in years gone by. And as the course has developed they’ve always kept that historically as out of bounds.

“And we felt that was highly appropriate to do so this year as we’ve rebuilt the course. We try to stay true to how the course played.”

It was a quadruple-bogey start for the Ulsterman. #TheOpen pic.twitter.com/nzxm2G4UXI

McIlroy would re-tee, find the left rough and then take another penalty stroke for an unplayable lie after his fourth shot found some nasty fern bushes left of the first green. In the end, McIlroy kicked off his Open Championship with a quadruple-bogey 8.

“If anything, I sort of leaked one right (on Wednesday) in the practice round and hit it OB right,” McIlroy said. “So I was trying to guard against that a little bit, and a little bit too much right and got the ball going left.

“But I don’t think it was that. It was a bit of a tentative golf swing with a hard wind off the right and the ball just got going left on me.”

Missing some chances in the immediate aftermath of the opening quad, McIlroy turned in 3-over par and seemed to steady the ship, but a lapse in concentration on the par-3 16th led to a double bogey that included three putts from five feet.

“As I’m walking up to hit the next one, I’m saying to myself, ‘I should have trusted the wind,’” McIlroy said. “I’m berating myself about the putt I just hit, went to tap it in and didn’t.

“That was inexcusable. Lapses of concentration like that, I feel like I’ve done a really good job over the last few years of being more with it and realizing, ‘OK, just keep a cool head.’ And there I didn’t. I hit it on the run and missed it.”

The cruel cherry on top was a triple-bogey finish on the 18th hole to post an 8-over par 79 and sit 13 shots back of first-round leader J.B. Holmes.