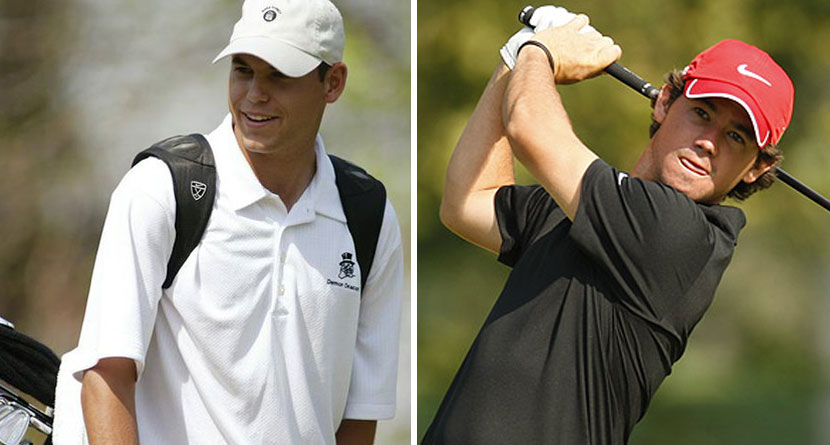 Every once in a while, the internet comes up with an awesome idea.

Last week, SB Nation writer Spencer Hall shared a post on Twitter of a high-school-aged college football player making his peers look silly with the caption, “Nothing makes me happier than stories of normal people having to deal with mutant athletes in high school.”

While that statement may not sound like an invitation to share personal horror stories of getting crushed by future star athletes, it opened the floodgates. From there, Golf.com’s Dylan Dethier took the torch and turned it into a purely golf-related question, asking his followers to share stories of future Tour pros beating their heads in during junior golf.

okay, who’s got the best stories of getting jammed on by future Tour pros playing junior golf?! https://t.co/gl8DeWddtS

The responses didn’t disappoint — and the entire thread is worth a read — but here are a few of the ones that really stood out.

first college tournament I played in my teammate Bill Haas won shooting 63 63 66. He beat me by 50 strokes

Made a 15-foot eagle putt on the 72nd hole at Jr. World to tie my playing partner, Adam Scott… Two months later playing in US Jr Am Q I beat him by four shots in the morning round. I think he had enough of me at that point as he went out and shot a 10-under 62 in the afternoon

Eastern Am, early 80s. I get to the 18th, & I’ve watched the guy behind me stripe it 50 yds longer than my best drive, EVERY hole, piped down the middle. So at 18 green I ask a marshall, “Who’s that behind me?” “Oh, he’s a freshman at Houston. Steve Elkington…from Australia.”

Played with the man the myth the legend, Anthony Kim. I was going into my senior year he was going into 8th, I was 5’10 him like 5’3 hit it 25 yards by me, shot 3 rounds in the 60’s won’t by 3-4, were multiple PGA wins, a major and a players championship int he field, that I know

We played in Vandy’s tournament to open my senior year. I remember shooting something like 67 the last day to finish at 213 or so. Got clipped by a lanky Vandy sophomore named Brandy Snedeker, who finished with a cool…198 total for three days.

Watched @HV3_Golf dominate Old Dominions tournament by about 10 shots. It was right before Halloween and he just kept saying how he couldn’t wait to get back to ECU to party

Jr event in Jax Fl. Bubba Dickerson and I were tied for the lead at E. Final rd rain/wind come in. Bubba 76. Me 81. Some kid from Spain (why was he in Jax?) no one had ever heard of shoots 69 and wins by 3. @TheSergioGarcia

Played college golf in the PA. Didn’t swing a club for the winter months. Played a practice round and 3 competitive rounds for a 232 total (~77 avg which felt amazing for not playing for 4 months). Lost to Xander by 27 strokes

Natalie Gulbis -4 in a 9 hole match as a sophomore in high school (men’s team) that included a chip-in from directly behind the trunk of a small tree. No idea how it went in, but it did. Lost by 9.

Took on Tyrrell Hatton in a junior match and playing off 4 and him 0 I said let’s go off scratch. He had 6 birdies and 6 pars through 12..

These are GOLD! Here’s a meagre contribution: https://t.co/mr0m3FY9BJ

@jlmountainman shot 68 at Stonebriar in a high school event on a cold, windy, miserable day in about 1989. I’m pretty sure only one other person broke 80 that day with a 79.

I was in final group of Southern Jr Am, I think with @BigEinBigD…this was mid 90s. Charles Howell III was in group in front. I had to watch him bomb 30’ putts all day while waiting to hit. He shot 65 and passed all of us. Very typical for him in those days. A real stud.

Played golf with some kid named Dustin when I was 23 and he was 16. Later my coach asked me what I thought and I replied ‘hes the greatest 16 year old I have ever seen and that includes Tiger.’

We had all heard he was basically good enough to play professionally and I think he was only a freshman. But damn it was crazy to see in person this 14-15 year old hammering the all like a man. Couldn’t have been a nicer guy either. Always root hard whenever he’s in the mix.