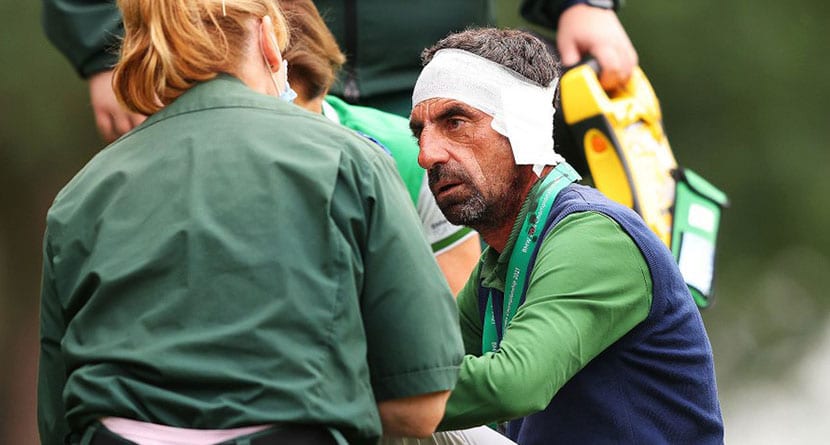 Italy’s Francesco Laporta came into Sunday at the BMW PGA Championship carrying the 54-hole lead after rounds of 68-65-69 put him at 14-under par and staring at the biggest victory of his career.

Things didn’t go to plan in the final round at Wentworth, however, as the 30-year-old failed to get anything going on the front nine while a pack of chasers were able to overtake him by the time he made it to the turn.

At even-par through 11 holes, Laporta birdied the par-5 12th hole before a nervy approach into the par-4 12th headed outside the rope line, caroming off the left side of his swing coach’s head.

Pietro Consenza was treated by medical personnel on the scene and had his head heavily bandaged.

The head wound wasn’t going to stop Consenza from watching his pupil finish, however.

Laporta saved par on 12, birdied the 13th hole, but gave the stroke back on the 14th. He was able to manage another birdie coming in, but his 2-under par round was the highest of anyone who finished in the top-14.

Billy Horschel fired a final-round 65, which included a birdie on the 72nd hole to win his first Rolex Series event and become the second American to ever win the title.

“It’s been an unbelievable week,” he said. “I’m excited to be the 2021 BMW PGA Champion. This event to me after I left here in 2019 was an event I wanted to win in my career before it ended.

“Adding my name (next) to Arnold Palmer, that’s legendary stuff. That guy, if it wasn’t for him, we wouldn’t have this modern era of golf to play in front of thousands of fans and big sponsors. Tiger Woods took it to another level but Arnie is the one who started it. So to have my name on that trophy next to his being the second American to win this event here at Wentworth is pretty special