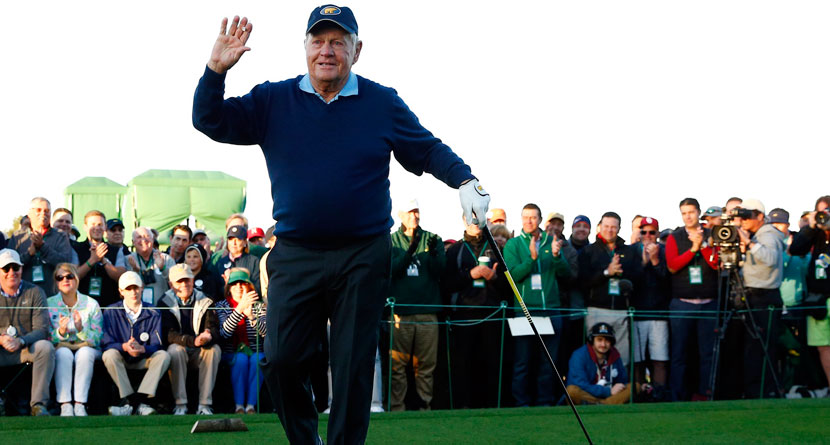 Jack Nicklaus has been on a bit of a heater as of late.

First, the 79-year-old 18-time major champion holed a ridiculous putt from off the green to win the Sycamore Hills National Pro-Scratch Invitational two weeks ago, and then this past weekend, he was at it again at the PGA Tour Champions Ally Challenge.

Like any good club event, the tiebreaker was a closest-to-the-pin chip off with the lion’s share of $25,000 on the line. With none of the other three tight, Nicklaus stepped up to the designated chipping area and did what he does.

“(I) told Barbara that I don’t think I have any magic left in me!‬” Nickalus captioned the hole-out. “18th hole. $15k carryover—all for charity! Chip-off to break a tie, with Dierks Bentley and Henrik Zetterberg holding a slight lead over my partner Kid Rock (Bob Ritchie) and me.‬ Then I got a little lucky!‬ And Bob was a little happy!”

As Nicklaus mentioned, the chip-in was worth $15,000, with Bentley and Zetterberg getting $10,000 to give to charity.

Adding some interest to the proceedings was that prior to the round, Nicklaus had 10 new clubs made up for him by Bear’s Club head pro, Eric Veilleux. Veilleux made “some minor tweaks to the bounce” of his irons and added in a few new fairway woods.

‪Don’t play much but when I do, I try to dial in the “weapons” to match my whopping 86mph swing speed!?‬ Eric Veilleux, head pro at The Bear’s Club, helped me make some minor tweaks to the bounce and then we added new fairway metals. Now we’ll see if 10 new clubs work today at @allychallenge as I partner with @kidrock (Bob Ritchie) and we “battle” country music star @dierksbentley and @detroitredwings legend Henrik Zetterberg in a Celebrity Shootout! Of course, if the clubs don’t work, well, I guess we’ll lose. Play hard Bob!?‬ #allychallenge @pgatourchampions @golfchannel

The new weapons were enough to get Nicklaus and Ritchie to the chip-off where Nicklaus’ bump-and-run found the bottom of the cup.