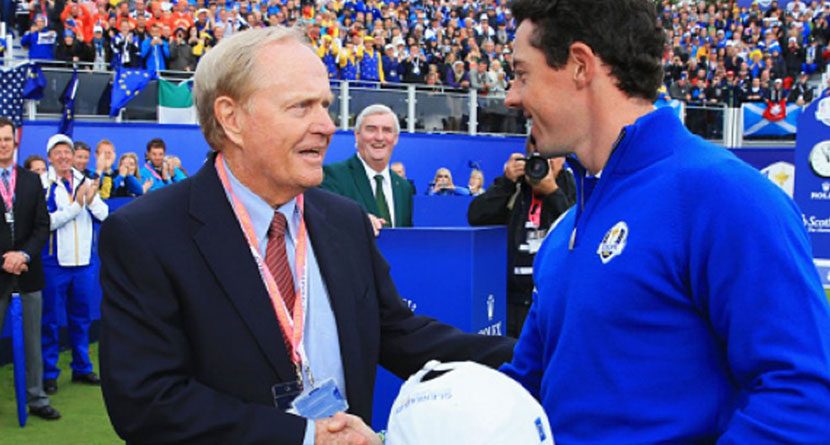 Despite a promising and exciting start to the 2016 Olympic Golf competition in Rio de Janeiro, the absences of some of the game’s biggest stars still casts a shadow over the sport’s return to the Games. Chiefly among those conspicuous in their absence is World No. 4 Rory McIlroy who, after some wavering on his decision, announced he wouldn’t be playing and then made some controversial comments prior to last month’s Open Championship.

Rory McIlroy: “I didn’t get into it to golf to grow the game. I got into golf to win.” https://t.co/XFpzuSdOKk pic.twitter.com/zSEzSHlEwC

Now, with the Games underway and golf off to a good start, McIlroy got some backing for his comments from a pretty big person in the game: Jack Nicklaus. Speaking some 5,000 miles away from Rio at Scioto Country Club ahead of the U.S. Senior Open, Nicklaus backed Rory’s comments saying that while he not considers his biggest responsibility in golf to be growing the game, he didn’t always feel that way.


Emily Kay at SBNation.com had the story.

“When I was playing the game, I wasn’t into growing it either,” Nicklaus told reporters ahead of this week’s U.S. Senior Open. “Did I play a lot of places? Sure. And by playing a lot of places that helped to grow the game.

“But I was there to win, not grow,” Nicklaus added. “I think when Rory said he was not into growing the game, he was into playing the game.

Nicklaus initially wondered about the reasons the Big Four (Jason Day, Dustin Johnson, Jordan Spieth and McIlroy) opted out of Rio, but has had a definite change of heart.

“I was a little critical of the guys to start with. I thought it might have been selfish of them not to go. Then I started looking at that, and it is not the pinnacle of their sport,” Nicklaus said. “I think when Rory said he was not into growing the game, he was into playing the game.

“Well, I look back at it. I mean, I’m past playing the game. My game is gone,” he added. “My focus on the game of golf now is to grow the game. So, yeah, they are into playing.”

Nicklaus’ comments surely are appreciated even if they are a little tardy, but it’s been the same conversation all along. McIlroy — or you or me or Tiger Woods — didn’t pick up a club in hopes of someday inspiring a kid in a far away country to take up the game. Perhaps as a byproduct of his hard work and success, that responsibility came later in life, but to bash a player for saying didn’t start in golf to grow the sport is nothing but honest.