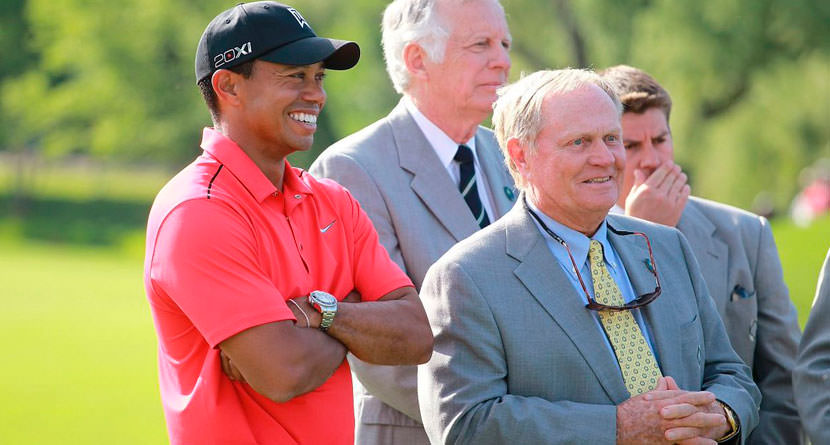 In the aftermath of Tiger Woods’ return to competitive golf earlier this month at the Hero World Classic, almost everybody was fully on board with the 14-time major champion’s quest to regain some form. However, you can count Jack Nicklaus as one of the few movers and shakers in the golf world who won’t be glued to his television every time Woods tees it up.

Speaking prior to this weekend’s PNC Father/Son Challenge in which he will compete alongside his son, Gary, Nicklaus went as far to say that he is “not interested at all” in watching Tiger’s latest attempt at a comeback.

“I wish Tiger well but I am not going to be watching TV coverage of him competing,I have watched him play golf for 20-somthing years, so why would I want to watch more. I really don’t want to watch anyone play golf (smiling).” Jack Nicklaus

The Golden Bear, in Orlando competing with grandson Gary Nicklaus Jr. at the PNC Father/Son Challenge, was quite clear Friday when asked if he was interested in watching Woods’ attempt to reclaim his stake in the game.

Tell us how you really feel, Jack.

OK, but that doesn’t paint the whole picture. Nicklaus is not indifferent to the success of Woods, who is still chasing the Golden Bear’s record of 18 majors. The 77-year-old clarified that he does hope the best for Woods: just don’t expect him to be a TV viewer … for any golf for that matter.

“Do I wish (Tiger) well? Yeah, but I’m not interested in watching him,” Nicklaus said. “I’ve watched him play golf for 20-something years, why would I want to go watch more? I don’t watch anybody play golf.”

When you’ve won 18 majors and 73 PGA Tour titles, there’s really not a whole lot of reason to watch others play the game.

But Nicklaus did iterate that the television set is always on where he is, which means he does occasionally see a golf shot on the tube. He got a glimpse at a couple of Woods’ swings as he walked by the TV during the Hero World Challenge.

His takeaway? Maybe he doesn’t care to watch much, but Nicklaus echoed the optimistic sentiment of most observers.

“Tiger seemed to hit the ball pretty well over there and seemed to enjoy it and be pain-free and I wish him well,” Nicklaus said. “The swing as I saw, looked good. It looked like a swing of somebody who didn’t want to hurt his back.”