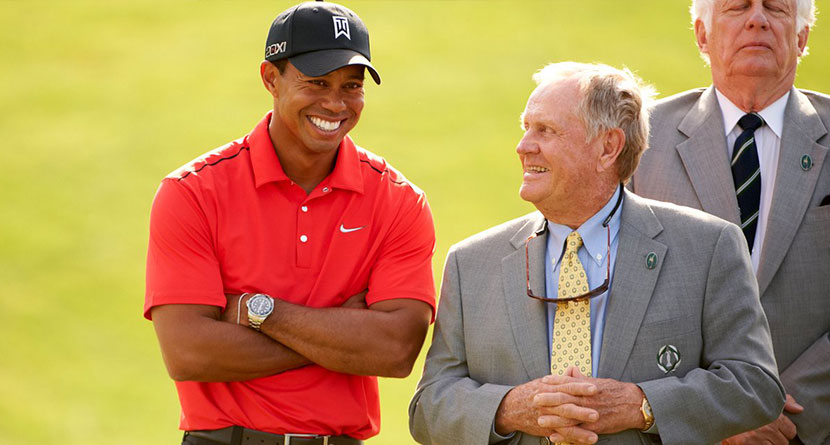 The theories about what makes Tiger Woods so great in an era where equipment has closed the gap between the rank-and-file of the PGA Tour and upper-echelon talents is exactly where Jack Nicklaus begins.

Speaking earlier this week to reporters ahead of his 80th birthday next week (January 21), Nicklaus spoke on a variety of topics, but it wasn’t long before Woods came up.

With inevitable comparisons between the two always coming up, Nicklaus went down the road of differing eras offering different opportunities, and given Woods’ age and the era in which he grew up in, Nicklaus believes that has given him an advantage over many of the guys he’s competing against week-in and week-out on the PGA Tour these days.

Jack shares his take on why Tiger is able to make the game look so easy. https://t.co/Iu2dA4yB1c

“I think the equipment we played was far more challenging and rewarded us more for hard work than the equipment of today,” Nicklaus said of his prime, according to Golf.com’s Dylan Dethier. “I may get a little static about that because the average golfer actually likes the equipment for today, and I understand that.

“I think Tiger was really taught well by his father, he was taught to play with the old equipment so he could play more shots. He was sort of the transition. He takes what he learned about how to play the old clubs and the old shots and still uses that with the modern equipment, which makes the game really easy for him.”

Nicklaus went on to explain that there’s a certain nostalgia for players and the equipment with which they competed, but that the modern equipment isn’t necessarily the thing that makes him most jealous of today’s Tour.

“I think that I’m probably envious that guys can go out on the golf course today and make a living playing golf,” he said. “When we played golf we had to go win golf tournaments to make a name to be able to go make a living. They don’t have to do that today.

“We were sort of the forerunners of that. Now the guys today can actually make a living, so I don’t know if I’m envious of that or proud of it, that we led that.”