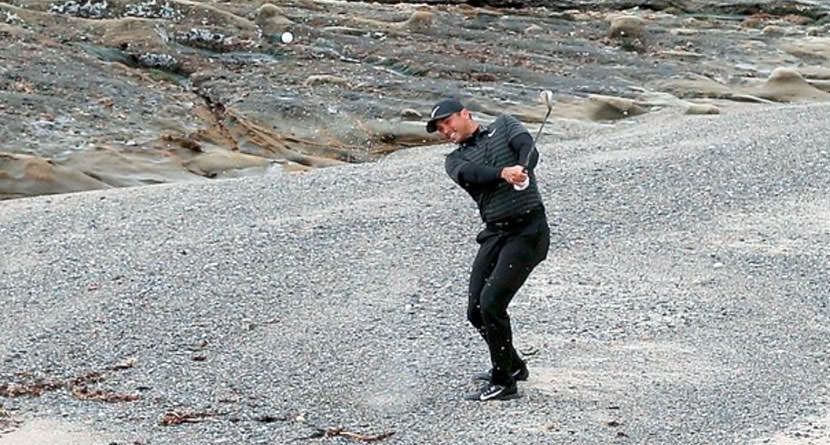 Jason Day entered Sunday at Pebble Beach with a chance to win in back-to-back starts on the PGA Tour and on the 18th hole he needed a miracle.

Trailing eventual winner Ted Potter, Jr. by three shots, Day found the 18th fairway and pulled driver out for his second shot as well. When the Toptracer showed a hook heading towards the Pacific Ocean, not only were his miniscule chances at winning dashed, but it appeared he was going to cost himself some serious money.

Instead, Day may have made the biggest and most lucrative par save of his career.

To recap, Day went driver, driver off the deck, explosion shot from the pebbles on Pebble Beach, bunker shot, 17-foot bender to make his five.

So, what was it worth?

Day ultimately ended up in a four-way tie for second place with Phil Mickelson, Dustin Johnson and Chez Reavie, which netted each of them $488,400. Had Day failed to get up and down and made a bogey, the three-way tie for second place would have paid $552,533 and Day would have split fifth-place money with Kevin Streelman, which according to the PGA Tour’s tie table comes out to a difference of $271,333.

Nobody would have been faulted for overlooking Ted Potter, Jr. going into the final round of the AT&T Pebble Beach Pro-Am, despite being the 54-hole co-leader.

First off, he was paired with World No. 1 Dustin Johnson, who has two wins among his eight top 10 finishes in this tournament.

Potter has also been almost completely irrelevant on the PGA Tour since his shocking win at the 2012 Greenbrier Classic, coming off four-consecutive years plagued with injury and poor play.

There was considerable doubt about whether he could handle the Sunday pressure. He’s gotten himself in the news more in 2018, but after leading last month’s Farmers Insurance Open with a first-round 66, he finished 75-74-82 to plummet all the way to T73.

Then on Saturday, playing the Monterey Peninsula course, an unbelievable start (11-under through 15 holes) had Potter on the 59 watch. But needing to play the final three holes just 1-under, he finished par-bogey-bogey for a disappointing 62.

None of that seemed to matter today.

After a three-putt bogey on the first hole, Potter took control of the tournament with a stellar front nine, making the turn in 3-under.

Then, in pole position, he stoically parred the entire back nine, staring down some of the best golfers on Tour and making clutch shot after clutch shot in the process.

In the end, it was Potter on top of the leaderboard, shooting a final-round 3-under 69, and winning by three strokes over the intimidating quartet of Johnson, Jason Day, Chez Reavie, and four-time Pebble Beach champion Phil Mickelson.