Day: Tiger is Pain-Free and Hitting It Long 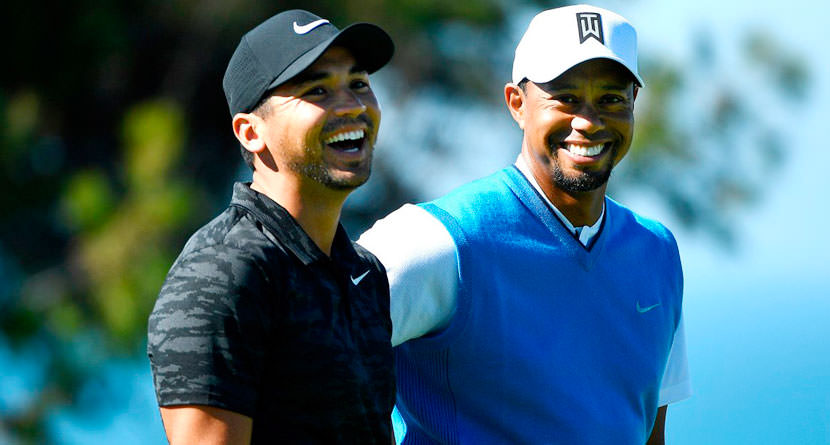 Tiger Woods’ return to competitive golf is less than a week away. While rumors are swirling about how well Woods could play in his debut, Jason Day answered some questions about Tiger’s health during his pre-tournament press conference at the Australian Open this week.

The 30-year-old Aussie has been in touch with Woods and he was bullish on his expectations for Woods.

GolfChannel.com rounded up his comments.

Jason Day says Tiger Woods told him he feels better than he has in three years, which is good news for Woods a week ahead of his return to the PGA Tour at the Hero World Challenge.

Day, a fellow Nike endorser, was asked about Woods during his news conference at the Emirates Australian Open on Wednesday. “I did talk to him,” Day said, per a report in the Sydney Morning Herald, “and he did say it’s the best he’s ever felt in three years'” Day said.

“He doesn’t wake up with pain anymore, which is great. I said to him, ‘Look, it’s great to be one of the best players ever to live, but health is one thing that we all take for granted and if you can’t live a happy, healthy life, then that’s difficult.'”

The Hero World Challenge will be played Nov. 30-Dec. 3 in the Bahamas and broadcast on Golf Channel and NBC.

Day, who has had his own health issues, said he could empathize with Woods.

“I totally understand where he’s coming from, because sometimes I wake up in the morning and it takes me 10 minutes to get out of bed, and for him to be in pain for three years is very frustrating.”

Woods has not played since February after undergoing surgery following a recurrence of back problems.

“From what I see on Instagram and what he’s been telling me, he says he’s ready and I’m hoping that he is, because from what I hear, he’s hitting it very long,” Day said.

“And if he’s hitting it long and straight, then that’s going to be tough for us because it is Tiger Woods. He’s always been a clutch putter and in amongst the best and it will be interesting to see.

“There’s no pressure. I think it’s a 17- or 18-man field, there’s no cut, he’s playing at a tournament where last year I think he had the most birdies at.”