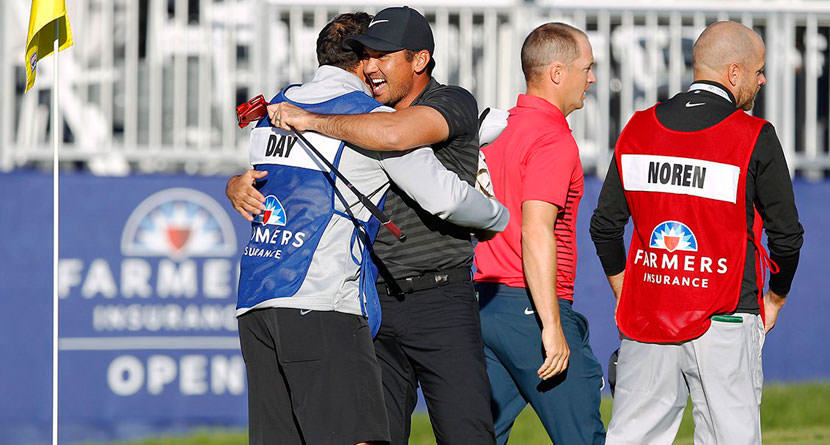 Keeping up with what is hot and trendy, the Farmers Insurance Open outdid both, needing Monday to determine its winner, with Jason Day outdueling Alex Noren on a sixth extra hole, the morning after the two matched shot for shot into the darkness at famed Torrey Pines.

Noren, not well known in the U.S. despite a stellar European Tour record and a lofty world ranking that has reached as high as No. 8 in the past year, nearly ended the tournament in regulation on the par-5 18th, but he sent his third shot deep over the green after a controversial, lengthy delay caused by playing partner J.B. Holmes. He was unable to get up-and-down for birdie, leading to a three-man playoff with Day and Ryan Palmer.

The three-man playoff became a two-man showdown after Palmer was eliminated on the first hole. After the fifth playoff hole failed to decide a champion, darkness forced a sixth playoff hole on Monday morning, where Day made quick work of Noren with a birdie on 18 after the 35-year-old Swede launched his second shot into the water and had to settle for bogey, and a runner-up paycheck.

The playoff victory highlighted a remarkable comeback effort from Day, who shot an opening-round 73 and found himself ten strokes out of the lead after 18 holes. A Friday 64, the low round of the tournament, vaulted him back into contention, and going into Sunday, he was just three shots behind Noren.

By the Sunday turn, Day, Noren, Palmer, and Holmes had separated themselves from the pack, but one by one, they failed to convert their back-nine chances (Day played the back nine 2-over), and the playoff was needed to determine the winner.

On playoff hole No. 6, Noren looked to have the advantage on the par-5 after a drive that was in much better position than Day’s. However, the advantage was short-lived as Noren failed to carry the pond in front of the green. Day layed up with his second, and then hit a pristine wedge to less than two feet from the hole on this third shot, forcing Noren to hole-out his penalty shot, which he failed to do. Day, then, tapped in his short birdie putt for the win.

Day, who also won the 2015 Farmers Insurance Open led the field in birdies for the week, and was fantastic tee-to-green on Sunday, especially on the front nine, in which he shot a bogey-free 4-under, and in the long playoff, where he made one clutch putt after another.

WHAT IT MEANS FOR DAY

The win was a big relief for Day, a former world No. 1, who had dropped outside the top 10 after a difficult, winless 2017 Tour season.

With this win, and recent improved play (5th Australia Open), Day is looking a lot closer to the man who was named PGA Tour Player of the Year after a dominant five-win season in 2015.

The Farmers Insurance Open triumph is Day’s 11th career victory, and his first since the 2016 PLAYERS Championship.

“Its been a long time coming. I know last year wasn’t the greatest season for me, and I had some stuff off-course that was distracting, obviously with my mom having cancer. Its special because I worked really hard in the offseason to try to get back to this position. I’m very thankful for my whole team, we just had to stay patient, and obviously my goal was always to get back to No. 1, so this is a good start in the right direction.”
– Jason Day, 2018 Farmers Insurance Open Champion