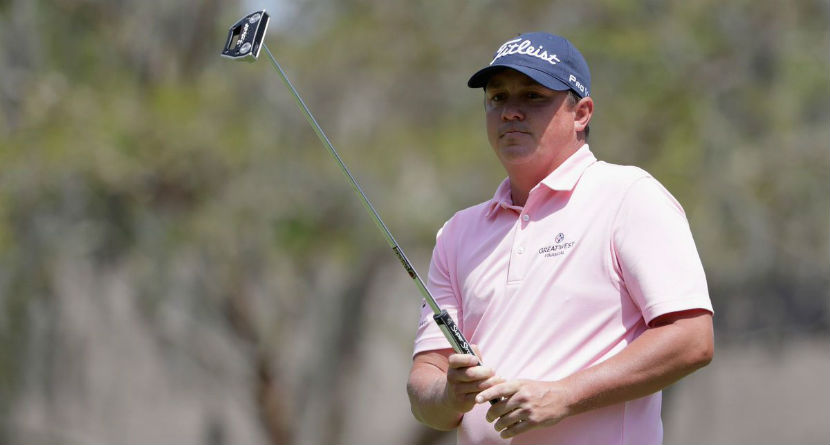 We all have ways of venting frustration on the golf course. Some of us throw clubs. Smarter, more mature people will take a deep breath. However, this is a new one, and it apparently rubbed some folks the wrong way. During Sunday’s final round of the RBC Heritage, 54-hole leader Jason Dufner tapped in for bogey on Harbour Town’s par-5 fifth hole, and then dropped the mic, or in this case his putter, in disgust forcing his caddie to clean up his mess. Have a look:

Yes, that actually happened. Dufner went on to shoot a five-over 76 and finished in a disappointing tie for 11th. Whether you disagree with his actions or not, some media members decided to call him out, especially given the fact that he hasn’t spoken to them by choice for the past two years.

Many golfers have been a prick when I’ve tried to talk to them. But Dufner is the first ever to go on and prove it on course so empathically https://t.co/nXvZXxyOmg

Alex Miceli was one of that was none too pleased with Dufner’s sportsmanship and wrote about it in Monday’s edition of the Morning Read:

Dufner instead walks the fairways every week as if someone were drawing blood from his veins, lifeless and without purpose.

That’s his prerogative, but most players understand that professional golf is entertainment, so they do what they can to provide fans with excitement and enjoyment.

Dufner? Well, look at what he did Sunday at the RBC Heritage.

Starting the final round with a one-shot lead, Dufner struggled. After missing a 7-foot par putt on the par-5 sixth hole – which he had eagled a day earlier – he tapped in the 2-foot bogey putt, dropped his putter onto the green and walked away, leaving caddie Kevin Baile to clean up the mess.

Golf is a game of honor and integrity. Dufner’s actions were the opposite of those characteristics.

Graham DeLaet, looking for his first victory on the PGA Tour, had the misfortune of being Dufner’s playing competitor and also was having a bad day. DeLaet didn’t display the childish emotions of Dufner.