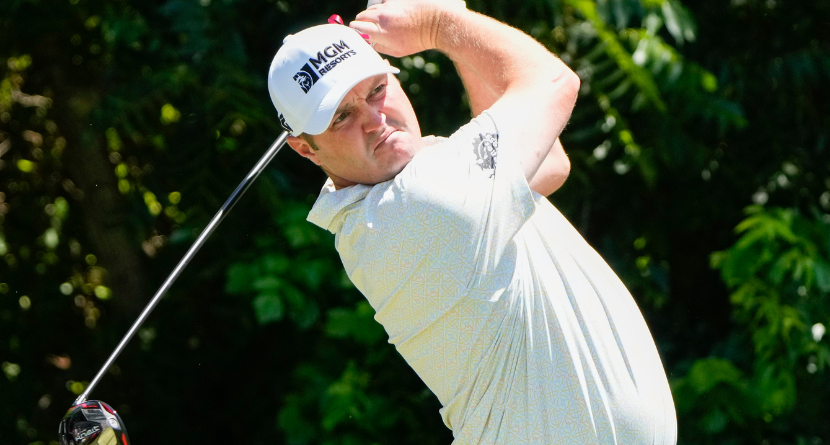 With a little under 50 yards left on the par-4 ninth hole at TPC River Highlands, Jason Kokrak flew his approach “87 yards into the unknown,” as the official description from ShotLink read. And with it, into the same murky morass, went his reputation.

Kokrak — who was in line to miss the cut at the Travelers Championship as the scene played out Friday — failed to finish the hole, his 36th. He then neglected to sign his scorecard, earning him as bizarre a disqualification as you’ll ever see.

The 37-year-old may not have had weekend golf in his future, but he did not seem especially geared up for a meltdown. Though, in the absence of an explanation, the Golf Twitterverse was eager to connect the dots.

Was this how Kokrak was choosing to make his LIV Golf Series intentions known — with a walk-off in the truest sense? Fed up with the oppressive rule of the PGA Tour, as other LIV lackeys like Sergio Garcia have professed to be, was Kokrak quite literally taking his ball and going home?

Jason Kokrak was just DQ’d for not recording a score on his final hole and not returning a score card.

He was even par and not making the cut anyways, but for what it’s worth, his second shot on that hole, the par-4 ninth, reads, “87 yards into the unknown.” pic.twitter.com/hlqJU3pwFu

“Jason Kokrak appears to have been disqualified for hitting his second shot on his last hole 44 yards over the green into spectators on the road, then just gotten in his car and driven off to join the LIV tour without even submitting a scorecard,” tweeted Nathan Hubbard, older brother of Tour pro Mark Hubbard and co-host of The Ringer’s Fairway Rollin’ podcast. “Growing the game!”

Jason Kokrak appears to have been disqualified for hitting his second shot on his last hole 44 yards over the green into spectators on the road, then just gotten in his car and driven off to join the LIV tour without even submitting a scorecard. Growing the game! pic.twitter.com/GvpTZ0yFNv

Asked to shed some light on the bizarre situation, Kokrak’s playing partner, William McGirt, doused the conspiracy-mongering in cold water. In a text exchange with Action Network’s Jason Sobel, McGirt explained that Kokrak wasn’t aware his ball was out of bounds. With a group bearing down on them, Kokrak decided a drop wasn’t worth the effort —an amateur move that’s utterly unbecoming of a Tour pro, much less a three-time winner.

But it wasn’t, as McGirt insisted via Sobel, some “some walk-off from PGA Tour life.”

For what it’s worth, Kokrak’s reported involvement with LIV dates back to before the series even had a name.

Texted with Will McGirt, who was playing with Kokrak. They didn’t realize the ball went OB. By the time he could figure out where to drop, the group behind was waiting. He didn’t want to hold them up and was going to MC anyway. But it wasn’t some walk-off from PGA Tour life.