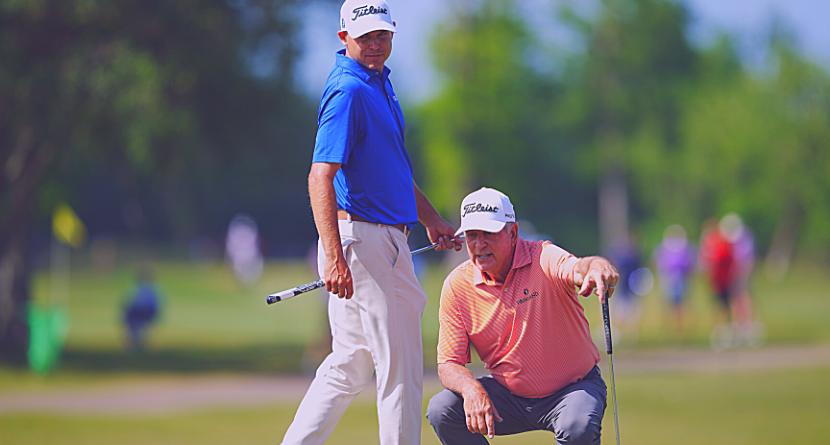 The father-son team of Jay and Bill Haas turned in one of the feel-good performances of the young season, sticking around for the weekend at the Zurich Classic to distinguish 68-year-old Jay as the oldest player ever to make the cut in a PGA Tour event.

It had been 42 years since the legendary Sam Snead set the previous mark by making a Tour cut at the age of 67 years, two months and 23 days. The elder Haas added to his own record for most cuts made all-time with 591; he trails only Mark Brooks on the all-time starts list with 799.

Making the feat even sweeter? Team Haas had to sweat out their achievement. As the birdies continued to fly during Friday’s alternate-shot format, the cut had moved to 8-under-par as Jay sized up a five-foot putt on the 18th green to keep them on the number.

“That was probably as nervous as I’ve ever been over a putt of that length certainly. It sounds silly just to have a chance to make the cut,” Jay Haas said. “We had, not a big cushion but a cushion, and it didn’t feel like we had it made by any means, but to somehow shake that putt in on the last hole was something I’ll never forget.”

Round of applause for Jay Haas 👏

Makes the cut at 68 on @PGATOUR with his son at @Zurich_Classic.

Added Bill: “I told myself walking up [to the 47-footer for birdie at the last], I said, let’s just get this thing down close and let’s tap it in and hopefully that’ll be good enough. I knew the cut was going to be close. It’s just hard when you’re trying so hard. It’s one of the hardest things to do in golf is to let that go and quit trying so hard and just execute. I was struggling out there to execute.”

Team Haas wrapped a memorable week under quirky circumstances, going out as a twosome on Sunday and finishing in a tie for 36th at 12-under-par.

Both players are accomplished in their own right. Jay has nine career wins on Tour to go with three major championships on the senior circuit while Bill, 39, has six wins and a FedEx Cup title to his name.

Yet, as satisfying as it must have been for Jay to make Tour history with an assist from Bill, their most cherished shared achievement came at the 2015 Presidents Cup. Jay was serving as the United States’ captain and added Bill to the squad with one of his captain’s picks. When Bill rolled in a putt to clinch the winning point, Jay was overcome with emotion.