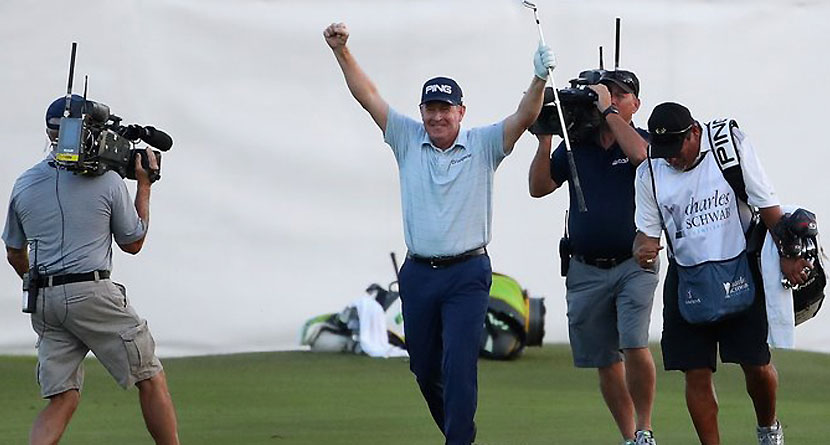 McCarron entered the season finale in first place in the Schwab Cup standings, but a mediocre T27 finish meant that the fate of the year-long title and the money that accompanied it were out of his control.

Maggert, suffering from a four-year winless drought, made a birdie on the 18th green to force a playoff with Goosen, who could have won both the tournament and the season-long title with a victory. After matching pars on the first playoff hole, the pair birdied the par-5 18th on the second playoff hole.

Heading to the par-4 17th hole, both players found the fairway and Goosen hit his approach tight. However, Maggert one-upped the Goose, holing a wedge from 123 yards to win the tournament.

“It’s nice to be back in the winner’s circle. Four and a half years on this tour is an eternity,” Maggert said, according to GolfChannel.com. “I’ve seen (playoff hole-outs) happen, but I never thought it would happen to me in my life. Obviously I didn’t make a lot of putts the last two days, but that just goes to show that sometimes you don’t need the putter working to play well.”

With the frenzied finish, McCarron earned the season-long title while holding a glass of wine.

The moment when you learn you’ve won the Charles Schwab Cup. ❤️? pic.twitter.com/BRAXbJemkj

McCarron won three times earlier in the season, but coming down the stretch, he was unable to get over the hump again, notching six more top-10s to keep his place atop the standings. In the end, McCarron claimed wanting it too much for his inability to get another win.

“The pressure of winning this trophy got to me a little bit, and I didn’t play as well as I’d been playing,” McCarron said. “I put so much pressure on myself to win this thing. As they say when you’re only shooting for the prize, your arrows don’t shoot straight.”