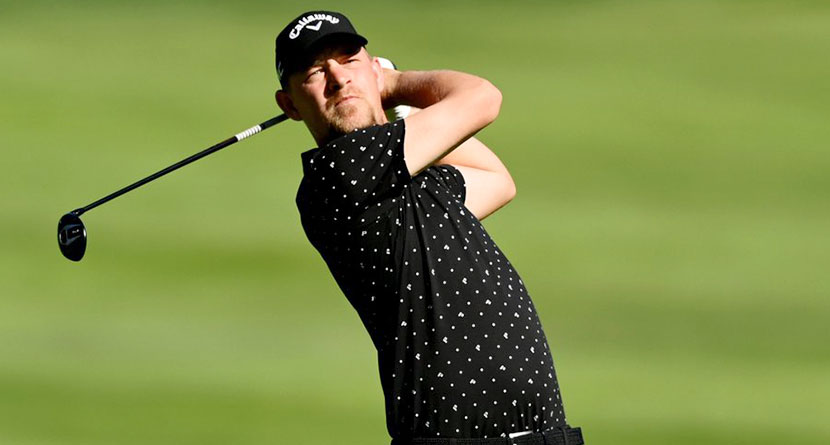 Jeff Winther has played on the European Tour for five years and in 128 tournaments, but had never gotten over the hump. He finished runner-up once in 2016 at the Tshwane Open in South Africa and third twice, most recently at the Gran Canaria Lopesan Open in April 2021.

However, this week at the Mallorca Golf Open in Spain, a pair of 8-under par 62s sandwiched a second-round 1-over par round of 71 to give him the 54-hole lead and a shot at his first professional win since his time in the Nordic Golf League.

Nothing worthwhile comes easy, however, and Winther had to overcome a pretty eventful morning on the beautiful Spanish resort island of Mallorca. With his wife, 6-year-old daughter and 2-year-old son in tow, the Winthers enjoyed a nice breakfast before dad’s late tee time.

After eating, Winther headed into the bathroom for a shower before heading to the course. Meanwhile, his wife popped into the restroom as well to use the facilities when the door shut behind her, locking both parents in.

Jeff Winther nearly missed his final-round tee time at the Mallorca Golf Open because he was locked in the bathroom. 😳https://t.co/Lj1BXEf2su

With the two young children in the room by themselves, 6-year-old Nora had to spring into action.

“After breakfast I went to have a shower and my wife came in to use the bathroom as well,” Winther said. “The door closed, and there’s no lock, but we locked ourselves in. There’s no lock on the door, but the handle didn’t work.

“Our little girl Nora, 6 years old, had to go and find guys at reception to break down the door. We were in there for 45 minutes, I think. I thought, ‘Geez not today, not Sunday, you’re leading the freaking event. Might not get there for your tee time.’ What a morning.”

Winther and his wife were able to be extracted from the bathroom with enough time to get to the course and warm up for what would turn out to be one of the biggest days of the 33-year-old Dane’s professional career.

Opening with nine straight pars, which included a switch-handed up-and-down on the par-3 third, Winther took his lead onto the back nine.

Par save of the week from the champion, Jeff Winther 🤯#MallorcaGolfOpen pic.twitter.com/QmJuRASTVK

He opened the incoming nine with a birdie on the par-5 10th and then made seven more pars to reach the home hole with a two-shot lead, where a bogey 5 was all he needed to secure his first European Tour victory.

“I think (the bathroom incident) probably settled the nerves because I thought I might miss my tee time and thought I might not get out. The kids are in the living room, 6 and 2 years old, what can you do?” Winther said.

“It’s unbelievable (to win with my family here), it’s not sinking in. I couldn’t have a better week. I said at the start of the week that this was going to be like a holiday and apparently holidays work out for me.”