Parnevik Penalized For Not Taking Mulligan After Hitting Himself 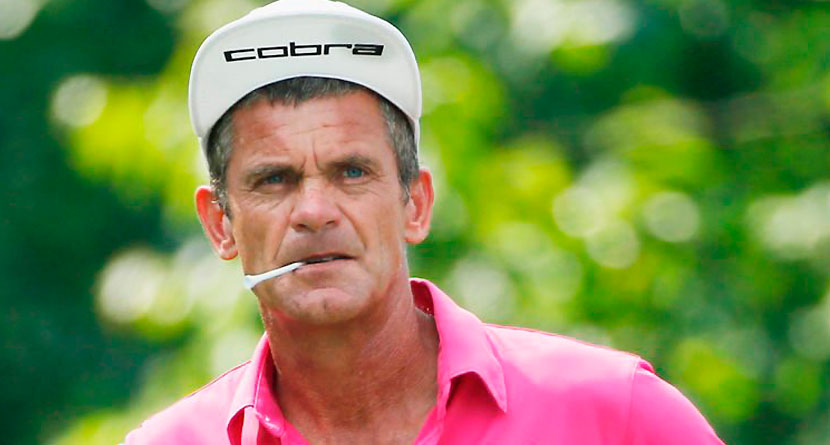 When the word “strange” and Jesper Parnevik are used in the same sentence, a fair assumption would be that the debate in question has something to do with the Swede’s unique sense of style, but on Sunday at the SAS Championship, it was a bizarre penalty that the three-time Ryder Cupper incurred that was making headlines.

At 1-over par for his round and 4-over par for the tournament, Parnevik approached the 209-yard par-3 third hole. Left with a short putt for bogey, Parnevik’s putt horseshoed around the hole and hit him in the foot. Misinterpreting the Rules of Golf, Parnevik tapped in for what he believed to be double-bogey.

The unique situation required some oversight beyond the rules officials on the ground, according to a report from Reuters. Stumped, the USGA was called to make a ruling, and it didn’t go in Parnevik’s favor.

Jesper Parnevik broke the rules when he *didn’t* take a mulligan — stumping rules officials in the process.

Under Rule 11.1.b, Exception 2, when a ball on the putting green accidentally hits a person (or animal or movable obstruction), “stroke does not count and the original ball or another ball must be replaced on its original spot.”

That means that Parnevik was entitled to one of the rarest rulings in professional golf: a legal mulligan.

“When a ball on the putting green accidentally hits any person, animal or immovable obstruction, this stroke does not count and the ball must be replaced on its original spot,” rules official Brian Claar said. “Jesper tapped it in. In that situation, he’s played from the wrong place. Unfortunately, he gets a two-stroke penalty for playing from the wrong place, and the one where he tapped in counts but the original stroke does not count.”

Parnevik finished the day at 3-over par and in a tie for 68th place. In the end, the additional stroke on his score from what he believed he had shot only moved him three spots down the leaderboard from T65 to T68, the equivalent of about $600.

While there is no video of Parnevik’s miscue, there’s no way it outdoes the beautiful disaster that befell Australian Tour pro Michael Clayton.