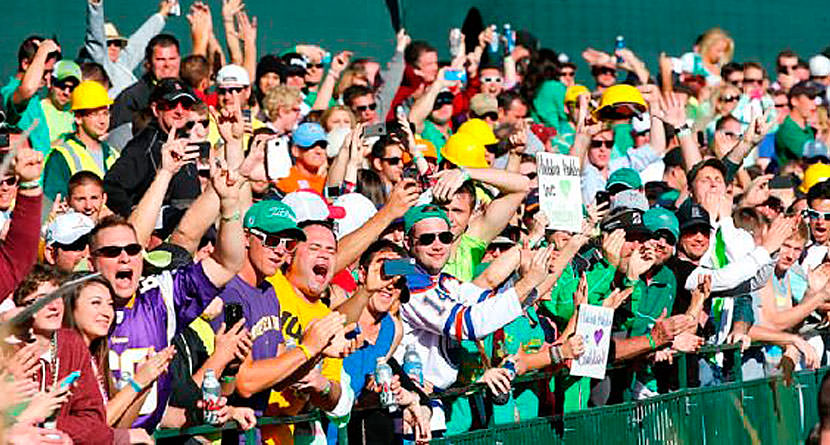 Most fans at PGA Tour events can only dream about playing in an event like the one they likely paid to attend. However, for one Waste Management Phoenix Open regular, that dream became a reality this week. It should be pointed out that Jim Knous isn’t your average fan who drinks himself into some liquid confidence; he’s a rookie on the Web.com Tour.

He and his friends made the trip to the Greatest Show on Grass an annual tradition since graduating from the Colorado School of Mines in 2012. Again this year, Knous and his friends were planning on renting a few houses in the Scottsdale area and cheering or booing at the famous 16th hole. In an amazing turn of events, Knous will actually be one of the players either booed or cheered by the rowdy fans thanks to a great round in the tournament’s Monday qualifier.

PGATour.com’s Kevin Prise had the story.

Knous took it upon himself to play his way into the tournament, as the Web.com Tour rookie shot a sizzling 7-under 65 in Monday’s open qualifier to secure the third and final available spot in this week’s event at TPC Scottsdale.

Knous has never played a PGA TOUR event – in fact, he has only made one career Web.com Tour cut in eight starts, and missed the cut by one shot at both Bahamas events to open the 2017 Web.com Tour season earlier this month.

But after a nine-birdie, two-bogey performance on Monday at McCormick Ranch GC, Knous will take his spot in a star-studded field along the likes of Rickie Fowler, Jordan Spieth and Phil Mickelson – in front of some of the most raucous fans in golf.

Including 15 of his closest friends from back in Colorado.

#16 at @WMPhoenixOpen is awesome… practice round day was fun and I’m sure the volume will only keep going up! pic.twitter.com/OSD70iPV4I

“It’s going to be incredible,” said Knous from his grandparents’ house outside Scottsdale on Monday night, with whom he celebrated a belated 27th birthday dinner on the evening before his hot qualifying round. “My college buddies and I … we all come down here and pile on 16, and get there super early and go watch and get rowdy …

“To be on the other side, actually hitting shots, is going to be wild. I’ve yelled at my fair share of golfers on No. 16, and now I’m going to be the guy getting yelled at.”