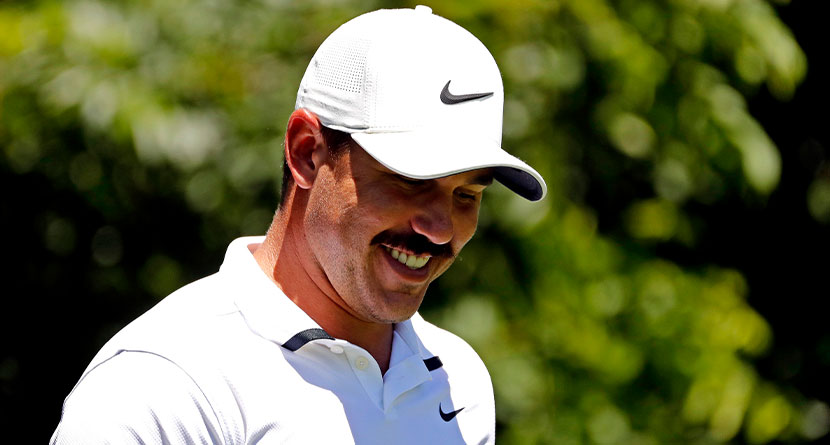 Rickie Fowler was the only player mic’d up on the first day of the PGA Tour’s resumption of play on Thursday, but without fans on the course at Colonial Country Club, Brooks Koepka was the one who made headlines for his on-course commentary.

With a skeleton crew in place, Golf Channel and CBS broadcast the first round of the Charles Schwab Challenge with relatively few hiccups as the tournament marked the return of live major sports in America.

After a few successful exhibition matches in the last four weeks, golf has been ahead of the curve when it comes to pandemic-era broadcasts, but nothing came close to the scope of Thursday in Fort Worth.

In an effort to bolster the broadcast, the PGA Tour’s broadcast partners attempted to put microphones on multiple players, but only Rickie Fowler agreed to go through with it. That didn’t stop mics on the course from picking up some ambient noise coming from Koepka on the par-3 8th hole.

Jim Nantz was back on the air for all of two minutes before he had to apologize for an f-bomb, I missed sports so much pic.twitter.com/Rk7aRuAvaX

Koepka’s playing partner, Jon Rahm, missed the green on the 176-yard hole, and proceeded to chip in, which impressed Koepka so much that he offered a compliment that wasn’t fit for air.

Jim Nantz, who was the lone CBS broadcaster in a tower on site, was caught off guard, and after a few seconds of stunned silence, apologized for the slip-up.

“Well, we were hoping for better audio with no fans surrounding the course,” Nantz said. “Apologize if anyone was offended by what they may have heard there.”