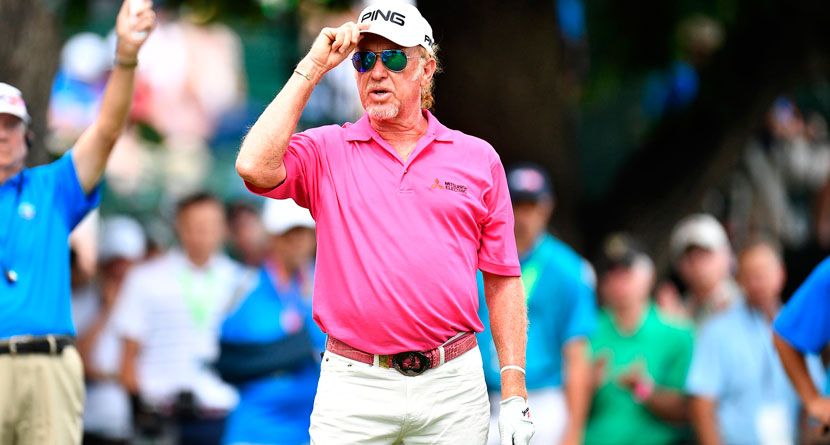 Viral internet challenges are nothing new.

Some have fantastic charitable beneficiaries like the Ice Bucket Challenge, while others are simply ways to cure boredom. The latest trend is the #BottleCapChallenge, which requires its contestants to unscrew a water bottle’s cap with a roundhouse kick.

Sure, it may sound a little stupid at first, but that’s before you see 55-year-old Spanish golfer Miguel Angel Jimenez — he of the famous pre-round stretching routine and cigar smoking on the course — accomplish the feat to perfection while wearing metal-spiked golf shoes at this week’s Senior Players Championship at Firestone Country Club in Akron, Ohio.

The World’s Most Interesting Golfer made that cap dance off the cap with ease, and for that, he was mighty pleased with himself. For comparison’s sake, the challenge isn’t nearly as easy as Jimenez made it look. Golf Channel Morning Drive analyst and former PGA Tour player Robert Damron showed off just how difficult this feat can be not once, but twice.

As with any good internet challenge, the gauntlet must be passed along and Morning Drive picked Phil Mickelson to be the next to attempt it. If his Ryder Cup celebrations are any indication, we expect him to do better than Damron.