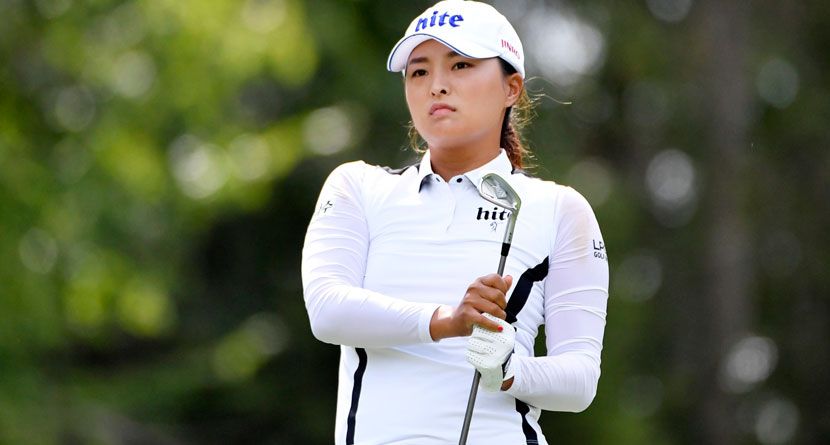 Whenever any professional golfer has their name mentioned in the same sentence as Tiger Woods, odds are that it’s a compliment.

For World No. 1 Jin Young Ko, her recent run of play not only put her in the same conversation with Woods, it included a sentence that she can take with her to her grave: she broke one of Tiger’s most impressive records from his historic 2000 season.

The accolades Woods racked up during his run in 2000 are mind-boggling: an adjusted scoring average of 67.794 that led to nine victories, including three major championships and zero missed cuts.

Over that span, Woods went 110 holes without making a bogey — that’s more than six straight rounds without dropping a shot. That’s where Ko’s incredible run of form comes into play. In the midst of winning her fourth event of the season — she’s won two majors already this year — Ko went bogey-free over all 72 holes at the CP Women’s Open.

Jin Young Ko becomes the first player to win a 72-hole tournament without a bogey since Inbee Park in 2015.

What’s more impressive, she hadn’t made a bogey in her previous 34 holes before she won in Canada. Heading into this week’s Portland Classic, the streak had become a major talking point on the Tour.

Her plan to keep the streak alive? Stay focused on her game. pic.twitter.com/OJjEjIRFha

As with all good things — unless you were competing against Ko — they have to come to an end and they did on Thursday in Portland. Ko got off to a good start, eagling the par-5 5th hole at the Columbia Edgewater Macan Course and birdieing the next two. She would par the par-3 8th before facing a knee-knocker for par on the par-4 9th.

The streak comes to an end after 114 bogey-free holes.

Jin Young Ko’s streak of 114 consecutive bogey-free holes is the longest known streak on the @LPGA Tour or @PGATOUR.

Earlier in her round she surpassed @TigerWoods 2000 streak of 110 holes. pic.twitter.com/zdwnBXQDhC

Naturally, that would be Ko’s only bogey of the round en route to a 4-under par 68. A pair of bogeys in her second round resulted in a 3-under par 69 leaving her at 7-under par through 36 holes and an astonishing 10 shots back of Hannah Green who backed up an opening-round 64 with a second-round 63.

These ladies are good.