Joaquin Niemann Going To Boston For Next LIV Golf Event 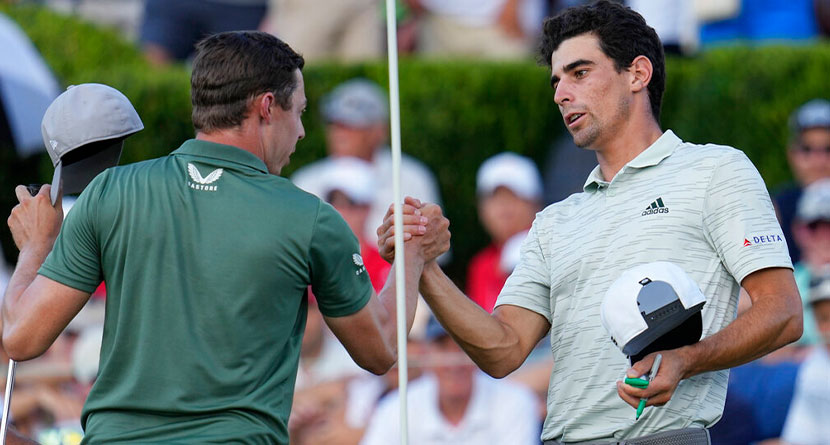 Joaquin Niemann of Chile was headed to Boston on Monday for the next LIV Golf event, which would give the Saudi-funded league its youngest PGA Tour winner as it fills out its roster for the rest of the inaugural season.

“Going but has not signed it yet,” Carlos Rodriguez, his manager at GSE Worldwide, said in a text to The Associated Press.

The 23-year-old Niemann, who is No. 19 in the world ranking, was the most prominent name mentioned in various reports over the weekend to leave the PGA Tour. The most notable was British Open champion Cameron Smith, which The Daily Telegraph reported three weeks ago.

Tiger Woods and Rory McIlroy led a private meeting among top players on Aug. 17 during the BMW Championship in which they discussed a new tournament model for the PGA Tour. Niemann took part in that meeting, and he would be the only one of the 23 players in attendance to defect.

The move would not be a surprise, mostly because Niemann’s closest friends in golf already have joined LIV Golf. Sergio Garcia is a mentor. Carlos Ortiz of Mexico is his best friend in golf and they often stay in the same house and bring their own chef.

The 23 year old Chilean with 9 wins worldwide including this years Genesis Invitational is a VERY strong addition to the LIV field. Welcome Joaquín! pic.twitter.com/E5GsJcHDUw

Niemann had been contemplating an offer since the start of the year. But early plans for the rival league were stalled in February with Phil Mickelson’s derogatory comments about the Saudis and the PGA Tour, even saying his end game was to get leverage for change.

And then the Chilean won the Genesis Invitational at Riviera — Woods presented him the trophy — and Niemann said, “Winning a PGA Tour event, getting a trophy, having Tiger there, all the history behind it, there’s nothing that can compete with this.”

But this decision largely was about his life on the road with his friends.

Rodriguez had told the AP on Sunday at East Lake that Niemann listened in the player meeting and then considered the changes coming on the PGA Tour starting next year, such as a model that would bring together the best in golf up to 17 times a year to compete for $20 million purses.

He said Niemann would talk it over with his father on Sunday night and then decide. The Telegraph reported that his signing bonus would be the $100 million range. Most of the LIV contracts are said to be over three or four years.

Niemann would add to the growing list of players who have given up on the Presidents Cup on Sept. 22-25 at Quail Hollow. Abraham Ancer and Louis Oosthuizen already have played LIV golf events. Niemann and Smith were among the eight qualifiers.

Leishman and Lahiri have previously played for the International team, though neither had qualified this year because of their play.

International Captain Trevor Immelman is to announce his four wild-card picks on Sept. 6.