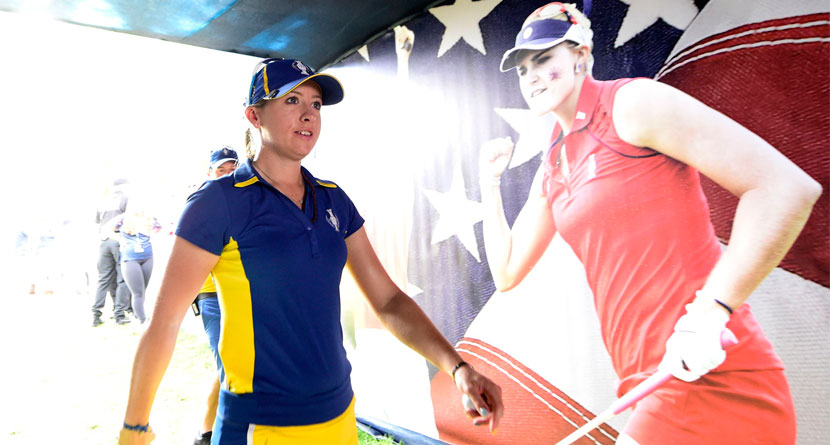 One of the biggest events in women’s golf begins on Friday, and that’s not a moment too soon for two competitors who were without their golf clubs until Tuesday morning.

A member of both the European and American Solheim Cup teams — Jodi Ewart Shadoff and Angel Yin — flew into Edinburgh Airport by way of Dublin, Ireland, but neither golfers’ clubs made the connection.

Making matters worse, both Ewart Shadoff and Yin play mixed bags of equipment, which made it difficult for equipment manufacturers to put together a new set for them.

“I have a lot of different brands so it’s really hard to replace,” Yin texted Golfweek.com’s Beth Ann Nichols on Monday.

Ewart Shadoff was on the same flight into Scotland as Yin and similarly landed without her bags despite seeing them out the window as they boarded in Dublin.

“She looked out the window in Dublin and saw that her golf clubs weren’t getting loaded onto the plane,” Adam Shadoff, Jodi’s husband, told GolfDigest.com. “She told the flight attendant and they assured her that they’d be loaded.”

“Apparently there are over 200 bags in Dublin that are meant for Edinburgh,” Shadoff texted Nichols. “They have sent a plane with just bags on that just landed, so hopefully they are on that.”

Thankfully, the clubs were on that plane and the story has a happy ending as the baggage of both Ewart Shadoff and Yin were delivered on Tuesday, giving both a few days of practice with their clubs before the competition kicks off Friday morning.

The United States leads the series 10-5 through 15 competitions, but the two sides have split the last four editions.