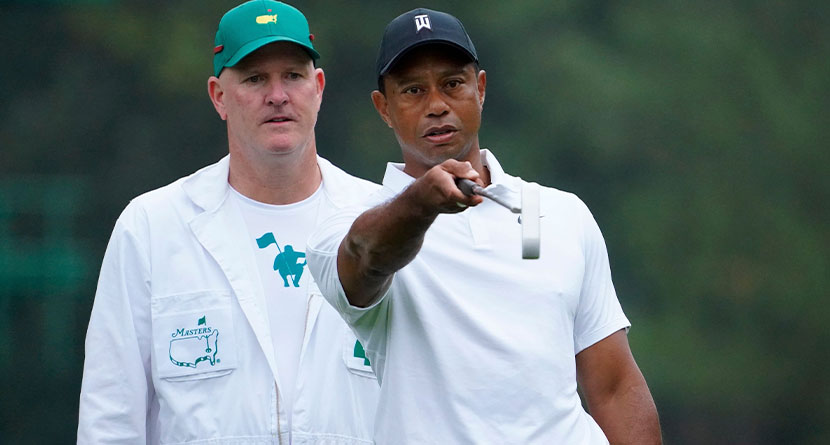 After a disappointing showing in St. Andrews at the 150th Open Championship, Tiger Woods’ caddie Joe LaCava is hoping his boss will be able to get a few more competitive reps before he tees it up again in a major championship. LaCava appeared on The Dan Patrick Show last week, and hinted at what he thought Tiger’s schedule might look like before the 2023 Masters in April.

He speculated that Tiger could play in the Hero World Challenge in December, as well as the PNC Championship with his son, Charlie. LaCava also mentioned the 2023 Genesis Invitational at Riviera Country Club, an elevated-status event that Woods hosts.

Woods made three tournament appearances in 2022, finishing 47th at The Masters, making the cut at the PGA Championship before withdrawing after his Saturday round, and missing the cut at St. Andrews.  Woods said he had “nothing planned” for the remainder of the year after The Open.

LaCava shared his disappointment in the result at St. Andrews, but thought the competitive reps could help Woods get his game back to where it needs to be.

“I think he’s working so hard to get stronger and healthier,” he said. “He’s working on his long game and working on his endurance, and I just think the short game has been neglected a little bit at this point and that showed over there.”

LaCava covered a lot during his 15 minutes with Patrick, ranging from why he carries the bag on his right shoulder to the role he played after Tiger’s near fatal car accident in February of 2021.

“I just stayed in touch with him, and then my wife and I went down, I think, in April, a couple months after the fact, just to go down there as friends,” said LaCava. “Regardless of what happens with the golf, we just wanted to make sure that he knew he had a friend around.”

LaCava said he won’t do much in the coming months, but added he’d offer to visit Woods in Florida if he wanted to get some prep for any competitive appearances.

“I’ll do the same thing and say to Tiger, ‘If you’re starting to feel better maybe October, November, maybe I’ll come down for a couple of weeks, we’ll hang out. We don’t have to play every day. We don’t have to practice every day. I’ll just be there and give you a little motivation,’” he said.

LaCava’s headline-grabbing interview was a nice respite from the seemingly constant golf rumors centering around defections to the breakway LIV Golf series. And nothing moves the golf needle quite like some Tiger Woods.

Watch the entire interview with LaCava below.