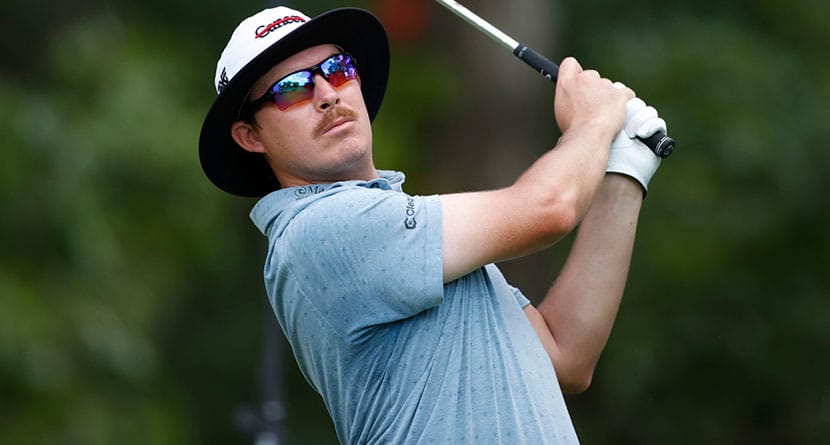 Joel Dahmen’s week at the Mayakoba Golf Classic would likely have gone relatively unnoticed except for a putting grip change he made during his third round.

After opening rounds of 3-under par 68 and 4-under par 67, Dahmen made it comfortably to the weekend in the last official Tour event of 2020. While Dahmen was on the cusp of contention, he made a switch during his third round that had, among other people, his caddie a little confused.

Messing around prior to his round, Dahmen attempted the Happy Gilmore putting style, which features a split-hand grip that is reminiscent of how a hockey player grips their stick. Dahmen’s caddie, Geno Bonnalie, alerted the larger golf world to the change.

2020 Mayakoba Rd. 3.
No quote today, but a story instead:
Before the round, Joel was messing around putting like Happy Gilmore. Split handed-right hand way down the grip. He was making EVERYTHING! He told me he was going to bust it out during the round. Did it on 17 and here: pic.twitter.com/ngWeiII3OE

After bogeys on Nos. 15 and 16, Dahmen made the switch and drained birdie putts on the final two holes to post a 3-under par third round. His strong finish gave Dahmen enough confidence to ping the Ryder Cup captain, Steve Stricker, and inquire about a spot on the 2021 team.

Question is, can the Happy Gilmore putting stroke hold up under @rydercup pressure?? https://t.co/ZrGcUG7KMo

Dahmen was set to carry the momentum over into Sunday with the same putting grip, which led to a fun exchange as transcribed by Bonnalie.

Me: Are you really going to putt like that?
J: why not? I make everything
Me: yeah, and you look super cool
J: You think I care about how I look!? I’m wearing a bucket hat and a Hawaiian shirt pic.twitter.com/Vq39NbJZgn

He kept the Gilmore putting style in play and fired a 2-under par 69 to finish the week tied for 20th while posting his best putts per greens in regulation number of the week (there was no ShotLink in Mexico, so more advanced stats were not available).

Of course, Dahmen had to share more evidence of his solid putting with Stricker, including the hashtag #RyderCupBound.

For what it’s worth, Dahmen is currently 26th on the U.S. Ryder Cup rankings, ahead of the likes of Jordan Spieth and Rickie Fowler with another nine months to make a move.