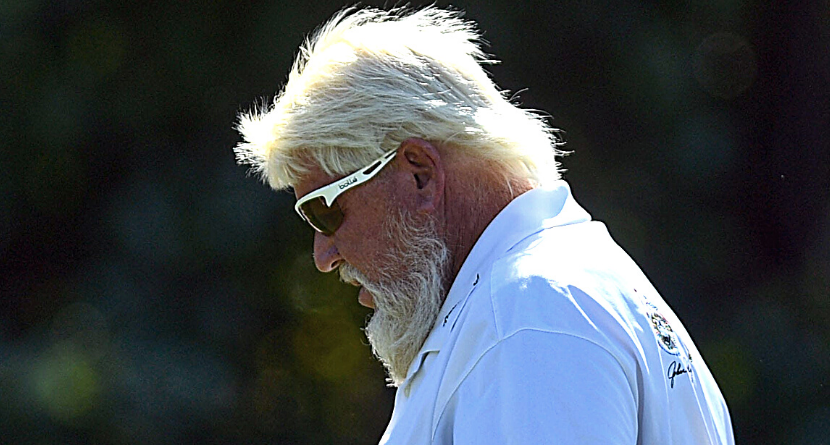 The fluffy white beard gives him a jolly aura. We’ve seen his edges softened by fatherhood. Yet John Daly is still quite capable of a spectacular flameout, the latest coming Friday during the first major of the PGA Tour Champions season.

Daly, 56, was disqualified from the Regions Tradition after failing to sign his scorecard at the conclusion of an even-par round of 72 capped by a late meltdown. A four-putt on the last had put Daly at 4-over for his final three holes, but he was still very much in contention at 4-under overall.

Unsurprisingly, Daly neglected to speak with the media after skipping out on the scorer’s tent. But in his post-round interview Thursday, he sounded like a player more than capable of coping with a bad break or two.

“The second hole, I missed a good opportunity for birdie, and then the third hole, I hit a good sand wedge, it just wasn’t long enough and I made bogey,” Daly said. “Other than that, it was pretty solid. I gave myself a lot of chances, I left a lot out there, got a couple of good breaks, too. It was a good day for me.”

This marks Daly’s first disqualification in more than a hundred starts on the senior circuit, which registers as somewhat surprising given his track record. There was a time when abruptly quitting was kind of Long John’s thing (along with a host of other habits considered unsavory by golf’s stuffy standards).

One of his most famous on-course tantrums occurred at the 2000 U.S. Open at Pebble Beach. Daly made a 14 on the 18th hole to finish the first round with an 11-over-par 83 promptly withdrew from the tournament — though he did sign his scorecard first.

The whole ugly episode was foreshadowed by Daly the previous year when he expressed doubt that he’d even show up at Pebble Beach after finishing dead-last in the 1999 U.S. Open at Pinehurst.

“I don’t even consider this a major anymore. My four majors are going to be the British, The Masters, the PGA and the Tour Championship.”

As the winner of the 1991 PGA Championship, Daly is still eligible to play this week on an exemption. So get your popcorn ready for Southern Hills.