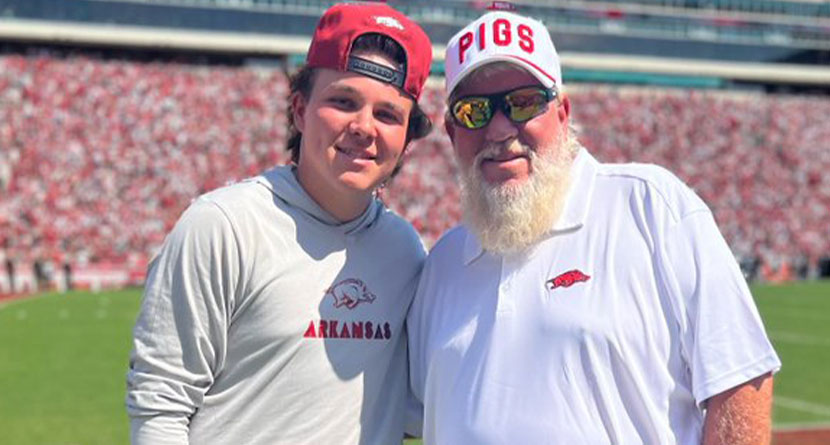 A rowdy college football crowd welcomed John Daly this past Saturday as he made an appearance on SEC Nation before his team’s home opener. No. 19 Arkansas faced off against the No. 23 Cincinnati Bearcats in Fayetteville, Arkansas.

Daly, a former Razorback golfer and diehard fan, was in attendance to soak it all in and show his support. Before heading to the set, Daly had a visit with Tusk, the team’s mascot.

In true Daly fashion, he arrived on a golf cart equipped with a red Solo cup and cigarette before checking in with fans and then heading to the set.

“I got some good shit right here.”

One of the show’s segments was for Daly to read “Hillbilly Headlines” alongside Marty Smith and Ryan McGee. One of those headlines was topical and Daly ate it up. Daly delivered an effortless “I’m not gonna lie, I’m drunk,” which sent the crowd into a frenzy.

It was a perfectly timed headline that highlighted Daly’s unabashed honesty and personality that’s made him a fan favorite for years.

Finally, picks for the game were made, and they made sure to cater to Daly’s specialty: hitting driver. The cast of SEC Nation teed off, using exploding golf balls to announce their picks.

Daly’s Arkansas roots run deep. He lives there, he played golf there from 1984 to 1987, and his son, John Daly II, plays there currently. A hometown hero of sorts, he’s often labeled “a legend” and these types of appearances only cement his status as such.

Arkansas won the game by a touchdown and logged a valuable early season win over a ranked opponent, sure to make Daly proud.

As if they weren’t before, it’s time to place John Daly television appearances in the “appointment viewing” category. Daly also might want to consider a call to Arkansas head coach Sam Pittman for a celebratory drink after big wins.