John Daly To Team Up With Son In Offseason Event 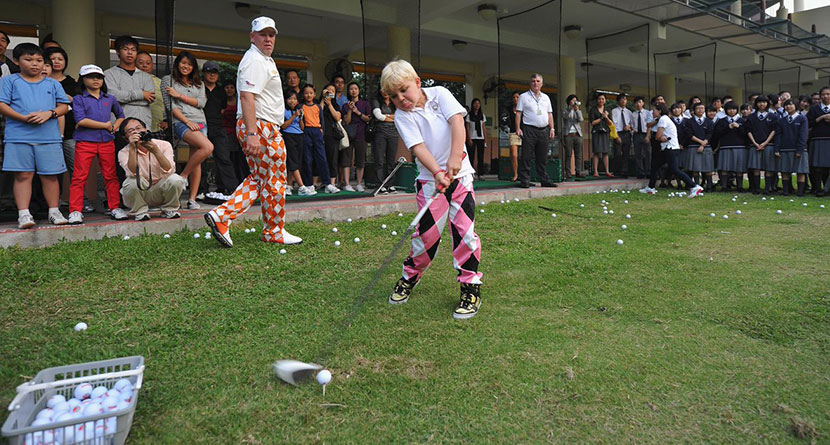 John Daly added a new tournament to his schedule this offseason: the PNC Father-Son Challenge at the Ritz-Carlton Golf Club at Grande Lakes in Orlando. Naturally joining him is a mini-me version of Long John, Little John.

Golfweek.com’s Jeff Babineau had the dispatch following the tournament’s annoucement.


If you watched ESPN’s recent “30 for 30” documentary on John Daly (“Hit It Hard”), you got an intense glance into the the two-time major winner’s “Wild Thing” days as a fast-living, drinking, frequently disruptive force on the PGA Tour.

But there’s another, softer, gentler side to John Daly, and never is it more on display than when he is with, or talking about, his children. His youngest, Little John, will join his dad in December as the Dalys make their debut in the PNC Father-Son Challenge.

In March, as Little John walked alongside him at the Puerto Rico Open, Daly beamed about his only son, who turned 13 this summer, and his boy’s love for the game. He said Little John was going to school and playing golf pretty much every day, taking on slightly older players in weekend “meets.”

“I don’t force it on him,” Daly, who turned 50 and joined the PGA Tour Champions this season, told Golfweek. “I don’t think you should force anything on a child, unless it’s a necessity. He’s just a good kid, and he loves to play golf.” Little John is 13 years old and plays out of the Gary Gilchrist Golf Academy in Howey-in-the-Hills, Florida. He’s also a dead ringer for his dad.

The Dalys will tee it up together Dec. 8-11, which can be seen on Golf Channel.