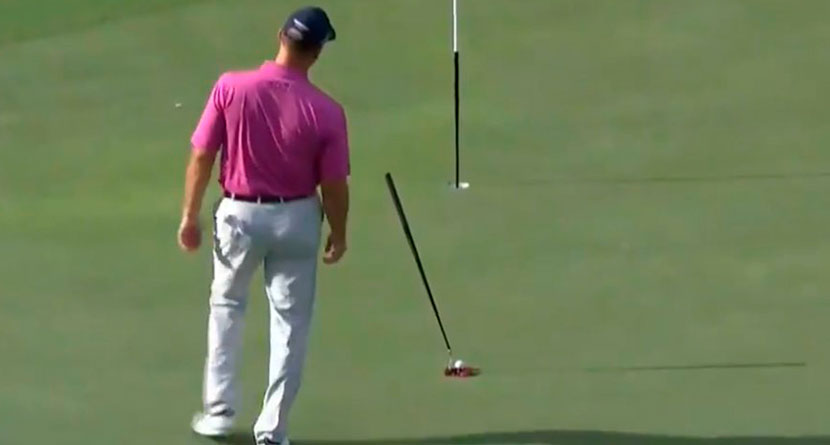 While Smoltz’s game is definitely for real — he qualified for the 2018 U.S. Senior Open and has played on the PGA Tour Champions on multiple occasions — it was how and with what he performed on the greens at the Four Seasons Golf and Sports Club Orlando.

Smoltz plays a Bloodline putter, which utilizes technology that includes an “ultra-light shaft” and an “ultra-low balance point” that enables the club to stand by itself, allowing the player to check their alignment from behind. A few videos of Smoltz lining up putts over the weekend caught fans off guard and wondering aloud if the club was legal.

No hands, no problem ?

“People are always looking to see where (you’re aimed) to get it on line,” Smoltz said, via Golfweek.com’s Beth Ann Nichols. “Because honestly if you can trust the line – you’re not always going to have the right line – but if you can trust it, that’s half the battle.

“Everybody I play with says ‘that’s illegal.’ I make a lot of putts in casual games.”

The Bloodline putter is USGA approved and has been put into play on many major Tours around the world, most notably by Ernie Els and Vijay Singh.

According to a statement from the governing body to Golfweek.com, “self-standing putters, only when placed right next to the ball (as they are intended to be used), are allowed to be used to assist the player in taking a stance or to point out the line of play.”

“I get a lot of complaints that it’s not legal … and all I tell them is ‘you need to buy one.'”

John Smoltz doesn’t need to worry about alignment on the greens, only speed thanks to his beloved self-standing Bloodline putter. pic.twitter.com/PdptV5LV0U

“All I tell (detractors) is you need to but one because they changed the rules of caddies can’t line you up,” Smoltz said. “This is the next best thing so they need to either get on board or quit crying.”