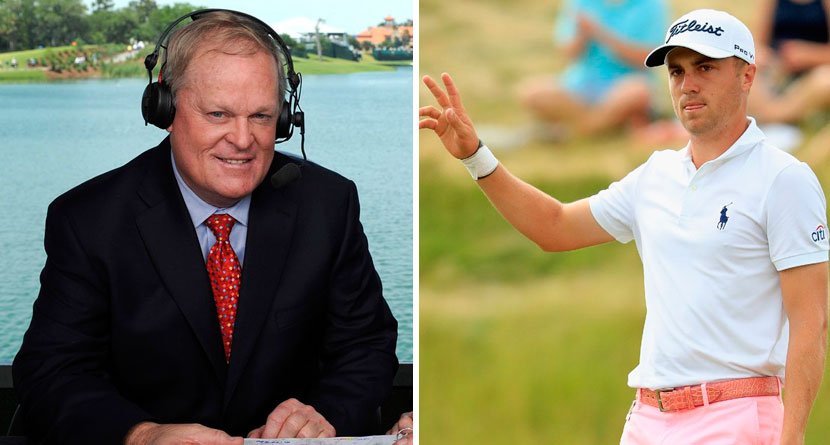 A scoreable Saturday at the U.S. Open turned into a historic one when Justin Thomas “nuked” a 3-wood from 310 yards out on Erin Hills’ par-5 18th hole to eight feet. Thomas calmly rolled in the eagle putt to shoot a 9-under par 63, joining an exclusive clubs whose founding member is NBC analyst and two-time major champion Johnny Miller.

A record-setting third round that moved @JustinThomas34 to one off the #USOpen lead earned him the @Lexus Top Performance of the Day. pic.twitter.com/thfxy1v1Dk

Thomas’ 9-under par was the best score in relation to par in U.S. Open history, and while it elevated the 24 year old into rarified air, he still needs another good round tomorrow to overtake 54-hole leader Brian Harman.

Even though Thomas ended Saturday one shot behind Harman, his historic round was the headliner from a gettable moving day at Erin Hills. That headline was spiced up even more when Mr. 63, Johnny Miller, added his thoughts to the newest member of his club.

.@JustinThomas34‘s eagle on the 667-yard 18th capped off a 9-under-par 63 to set the record for the lowest #USOpen round in relation to par. pic.twitter.com/hXuxYsP2L5

Forty-four years to the day after Miller’s famed round at Oakmont, Justin Thomas sank an 8-foot eagle on the final hole to fire a 9-under 63 and post the lowest score in relation to par in U.S. Open history.

Miller’s 8-under 63 in the 1973 Open endures as one of the greatest feats in the sport, in large part because of the difficulty of the course (Oakmont), the magnitude of the moment (final round) and the stars he overcame to win by one (Jack Nicklaus, Arnold Palmer, Lee Trevino, Tom Weiskopf).

And so forgive Johnny for not being ready to cede the spotlight just yet.

“Taking nothing away from 9 under par – 9 under is incredible with U.S. Open pressure,” Miller told GolfChannel.com by phone. “But it isn’t a U.S. Open course that I’m familiar with the way it was set up.

“It looks like a PGA Tour event course setup,” he said. “I’m not sure where the days of the 24- to 29-yard-wide fairways that we played every time went. It’s interesting to see where the USGA has gone with the U.S. Open, being a little more friendly than in years’ past.”

But Miller seemed unconcerned about his place in golf history, confident that his famed round at Oakmont would stand the test of time, even if his mark was eventually toppled.

“For one, the greatness of my round is the 63 in the last round of the U.S. Open to win by one,” he said. “Everything else is way secondary. If somebody does it tomorrow to win the U.S. Open by one, that’s the specialness of my round. And secondly, Erin Hills isn’t exactly Oakmont.”

Miller called the conditions here the “perfect storm for a good score.” The sprawling, linksy design was the first par-72 Open course since 1992. The widest fairways in tournament history gave big hitters the freedom to bash away with driver. And the rain-softened greens allowed players to go pin-seeking with their iron shots and, in Thomas’ case, even with 3-woods.

“The course wasn’t designed to be soft, and if it was going to be soft, it should have been 26- or 27-yard-wide fairways,” Miller said. “That’s what made it easy. The guys weren’t afraid to bomb it.

“It was never that way in the U.S. Open. It was always about really tight fairways and having to be a great driver. This went totally against the tradition of the U.S. Open.”

The conditions that Miller lamented didn’t only allow Thomas to go low. Eleven of the top-13 players on the leaderboard shot in the 60s on Saturday, resulting in a bunched leaderboard that nine players within four shots of Harman’s lead.

Here are some highlights from Saturday’s birdie fest.

Recapping the top moments from the third round of the 117th #USOpen at Erin Hills. pic.twitter.com/U520Pwff5A