Could This Be Johnny Miller’s Final Year With NBC? 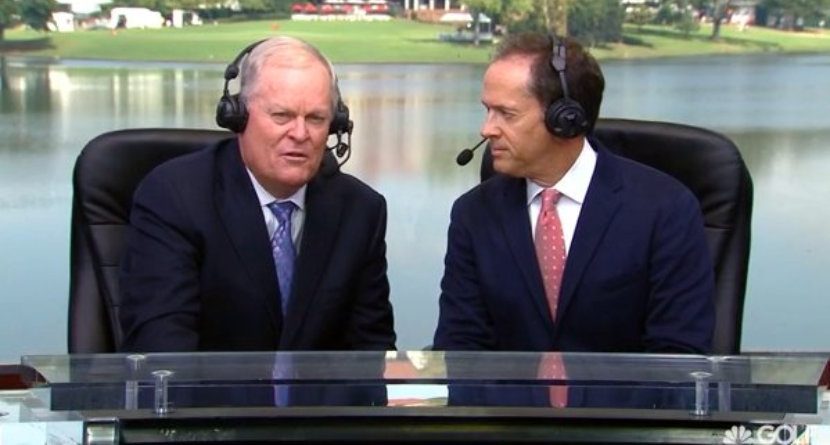 Whether you love Johnny Miller’s opinions or not, you’ve got to respect him. He’s been the lead analyst on NBC’s golf coverage since 1990, but this week’s Honda Classic marks what could potentially be his last go-around up in the 18th tower for the rainbow peacock. Miller signed a contract back in 2014 through 2017 with an option of 2018. Now, the 70 year-old who once shot 63 during the final round of the U.S. Open at Oakmont, will have a decision to make about his future.

Let’s say for argument’s sake that Miller decides to retire after this season. NBC would have to scramble for a replacement. It does have David Feherty, but he’s better as a course reporter than a tower analyst.

But what if Miller stays for another three years? There could be some incentives. The 2019 Open Championship will be held at Royal St. George’s Golf Club, where the very first Open was held. In addition, with the USGA and Fox in what could be precarious situation over their marriage, NBC/Golf Channel would be only happy to swoop in to regain the U.S. Open. If that happens, Miller might be persuaded to remain for at least one more go-around.

Could this be Johnny Miller’s final year as NBC’s golf analyst? https://t.co/dQeFU71SlB pic.twitter.com/CFqmH3FpIe

Certainly NBC would prefer Miller to stay, but it will defer to him on this. If he feels he’d rather leave, than it’s likely that the network won’t stand in his way, but if he decides to sign another contract, NBC execs would only be happy to have him stay.

It’s hard to imagine NBC without Miller, but the decision will be ultimately up to him. Until then, we’ll try to keep our nerves in check. The Honda Classic from PGA National in Palm Beach Gardens can be seen beginning Thursday at 2 p.m. ET on Golf Channel, or on PGA Tour Live starting at 7 a.m. ET with the feature group coverage.