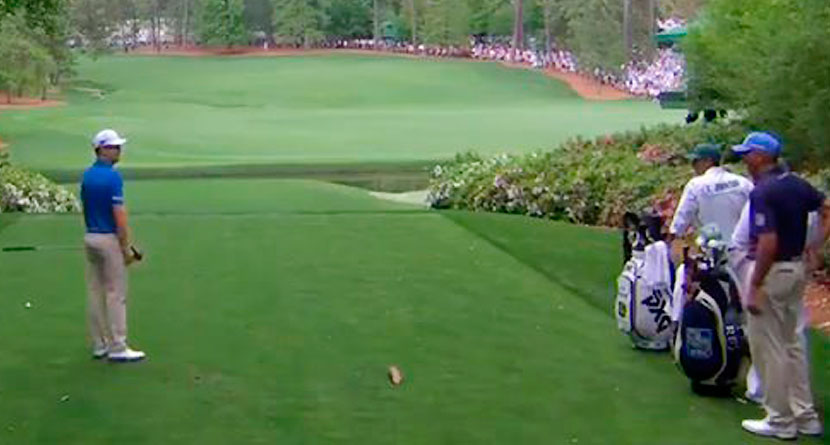 If you play this game long enough, you’re convinced that you’ve seen everything golf has to offer.

Zach Johnson, the 43-year-old, two-time major champion, thought he had seen everything in his 21-year professional career, but something bizarre happened on Friday on the 13th tee at Augusta National Golf Club that neither he nor playing partners Matt Kuchar or Ian Poulter had ever seen before.

As Johnson teed up his ball to hit his drive on the famous par-5 13th hole on Amen Corner at Augusta National, Johnson’s practice swing ticked his ball off the tee, hitting the tee marker and sending it some 10 yards in front of him.

Wow! Zach Johnson is all of us… pic.twitter.com/BvVWA1wBvU

The super buttoned-up Johnson couldn’t believe what happened and let out a very surprised and genuine, “Oh sh*t!”

After the second or two of shock wore off, Johnson looked to his playing partners and said, “what happens there?”

“It wasn’t intentional,” Kuchar responded after letting out an audible laugh.

Well, I thought I had done it all in this game. I was wrong. Now I’ve done it all! Even when I cut it, it still goes left! #CantFadeIt #ReTee Fore please, ZJ now driving. Again.

Kuchar was correct. Under the new rules written for Rule 6.2(5), there is no penalty for a mistakenly hit ball on the teeing area.

“Oh, it was a beauty,” Poulter told The Chicago Tribune‘s Teddy Greenstein. “I was going for a drink in my bag and then I heard the ball clip the end of his club and hit the tee marker. We had a bit of a chuckle.

“It’s probably the only hole you can do it and not get much of a laugh because no one’s there to have a laugh about it. But, yeah, it was a bit of a shock to him and all of us.”

It was Johnson who got the last laugh, however. After reteeing, he smoked his drive around the corner, reached the green in two and two-putted for a stress-free birdie.

The 2007 Masters champion finished the round at 1-over par, making the cut on the number at 3-over par. Johnson will play his third round alongside Japanese amateur Takumi Kanaya beginning at 9:25 a.m. ET on Saturday.