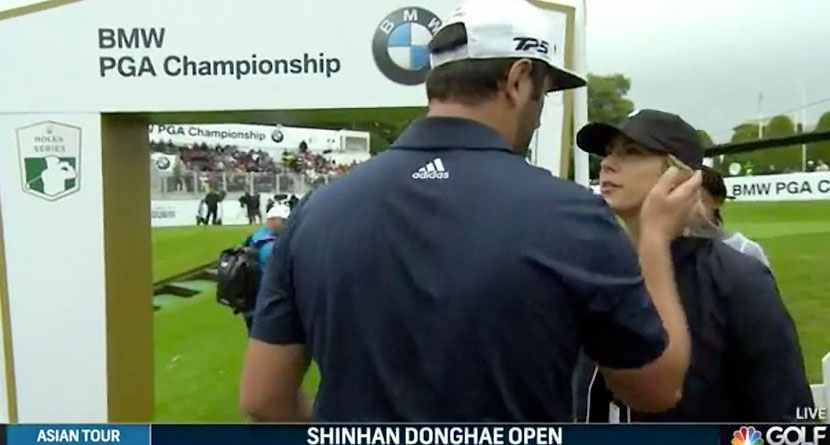 Jon Rahm has quietly had a pretty strong year in 2019.

Despite winning twice — the Zurich Classic of New Orleans and the Irish Open — and being ranked inside the top-5 in the world, the 24-year-old Spaniard has been left in the shadows of the Brooks Koepka’s, Tiger Woods’ and Rory McIlroy’s of the world for most of the calendar year.

Rahm had a chance to earn his third worldwide victory on Sunday at the European Tour’s flagship event, the BMW PGA Championship at Wentworth, as he entered the final round tied for the 54-hole lead with Danny Willett.

As Rahm finished up his warm-up and headed to the first tee, cameras caught Rahm and his fiancée, Kelley Cahill exchange a hug, kiss and well wishes. Sam Torrance, commentating for Sky Sports, took the opportunity to tease the young couple making the tongue-in-cheek assertion that the fans at Wentworth were very friendly.

“The spectators are so friendly here, it’s lovely,” Torrance said, eliciting laughter from his colleagues.

There’s not much commentary you can add to a guy walking to the tee, so good on Torrance for bringing some levity to the broadcast.

Rahm would go on to shoot final-round 2-under par 70 to finish in second place, three strokes behind eventual champion, Danny Willett.