Inside Rahm’s COVID-Forced WD From Memorial 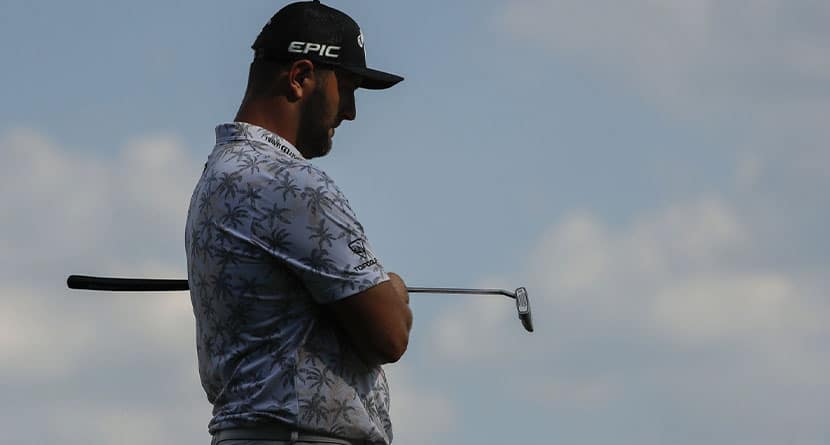 The PGA Tour’s worst-case scenario played out in real-time on Saturday evening at the Memorial Tournament: one of its brightest stars was in the midst of a record-setting performance when a positive COVID-19 test result came through.

Jon Rahm tied the 54-hole scoring record at Muirfield Village, capping off his third round by making six birdies in his final eight holes to take a six-shot advantage over Patrick Cantlay and Collin Morikawa into Sunday.

Unfortunately for Rahm, waiting just off the 18th green were two officials from the PGA Tour that had some devastating news.

Surreal TV moment as six-stroke leader Jon Rahm learns he tested positive for COVID and Jim Nantz tries to make sense of it without knowing what Rahm’s been told pic.twitter.com/WvD6LmAlxs

Thoughts after today’s round pic.twitter.com/gWkBAWE42F

“I’m very disappointed in having to withdraw from the Memorial Tournament. This is one of those things that happens in life, one of those moments where how we respond to a setback defines us as people,” Rahm said in a statement. “I’m very thankful that my family and I are all OK. I will take all of the necessary precautions to be safe and healthy, and I look forward to returning to the golf course as soon as possible.

“Thank you to all of the fans for their support and I’m looking forward to watching the showdown tomorrow afternoon with you all.”

Rahm was notified on Monday that he would be subject to contact tracing protocols after coming into close contact with a person who was positive for COVID-19. according to the PGA Tour. Under the PGA Tour’s health and safety plan, Rahm was allowed to remain in the tournament so long as he agreed to be tested every day and refrain from using indoor facilities at the tournament site.

Having tested negative Monday through Friday, Rahm performed the positive test following the conclusion of his rain-delayed second round on Saturday morning and before the start of his third round in the afternoon. The Tour got the result at 4:30 p.m. and had the sample tested again to rule out a false positive.

According to Andy Levinson, the PGA Tour’s senior vice president of tournament administration, the confirmation of the positive test came while Rahm was playing the 18th hole of his third round, which led to the awkward revelation of the result behind the 18th green.

“It’s a very unfortunate situation, obviously,” Levinson said. “The protocol that we have had in place for the last 50 events is being followed to the letter and unfortunately we are in a situation where we are this evening.”

Given his status in the contact-tracing protocols, Rahm and his caddie were taking part in social distancing measures during the tournament. The PGA Tour said Saturday night that all those who had been in contact with Rahm, which included contenders Morikawa, Cantlay, Scottie Scheffler, Xander Schauffele and their caddies, were cleared through contact tracing protocols to proceed in the tournament.

In the aftermath, the question of whether Rahm would have been able to play as a single to complete the tournament on Sunday came up as he is asymptomatic, and was ultimately turned down.

“We have followed our medical advisor’s recommendations on this, and that is not something that any medical advisor that we worked with has suggested, that we would allow someone who is actively infected to participate in our competition, where we know that,” Levinson said. “And it wouldn’t be in line with the CDC’s protocols as well, so I don’t see us changing that particular protocol.”

Questions and concerns about the vaccination of the players became a topic of conversation, and SiriusXM PGA Tour radio host Jason Sobel reported that Rahm had received his first shot the week of the tournament.

“While this is an incredibly unfortunate situation, throughout 50 events since the PGA Tour’s return to golf, there have been only four positive tests (including Rahm) within competition,” the PGA Tour said in its statement announcing Rahm’s positive test. “Rahm is the first positive, asymptomatic case as part of the Tour’s routine, contact-tracing protocols.”

With the U.S. Open two weeks away, Rahm began a 10-day isolation period, which would clear him by Tuesday morning of U.S. Open week, according to protocols.