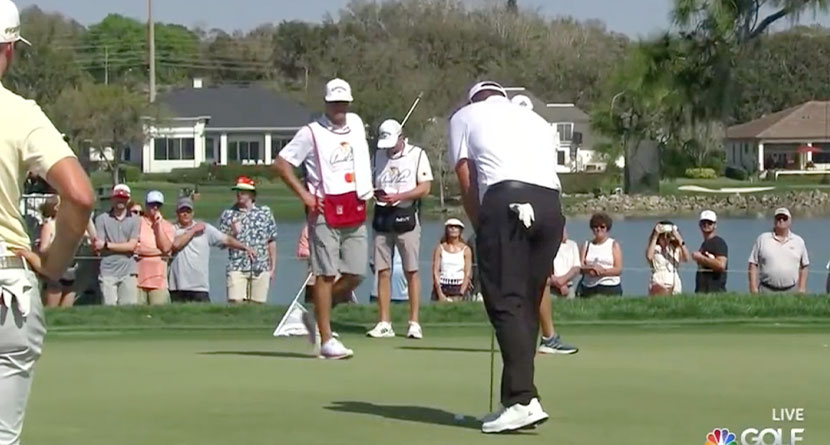 Jon Rahm is the best player in the world, at least according to the Official World Golf Ranking.

It’s hard to argue, too. Over the last 20 months, he’s won the U.S. Open (should have won the Memorial) and finished outside of the top-25 in an event just four times in 30 starts. Suffice to say, he’s very, very good.

Which is what made his head-scratching bogey on the par-3 7th hole at the Arnold Palmer Invitational all the more confounding. Lagging up a 22-foot birdie putt from off the fringe to 10 inches, Rahm attempted to stop his stroke on the tap-in, only to nudge the ball ever so slightly forward, costing him a stroke.

This is the shortest miss on TOUR this season. pic.twitter.com/IwwTWlrlKm

“I wish I could give you all the excuses in the world,” Rahm said after the round. “It just didn’t feel good in my hands, and I tried to stop, and I didn’t. I just simply didn’t stop. I don’t know. It was very odd.”

The bogey dropped Rahm to 2-over par for the day, a score he was able to improve upon by two over the final 11 holes of the first round.

The World No. 1 wasn’t the only one to hit a shot befitting a 15-handicapper on Thursday at Bay Hill. Corey Conners got in on the action with a cold-topped 3-wood into the water on the par-5 6th hole.

Corey Conners with the stone-cold top into the drink. It happens to us all. pic.twitter.com/LEHpzb61SO