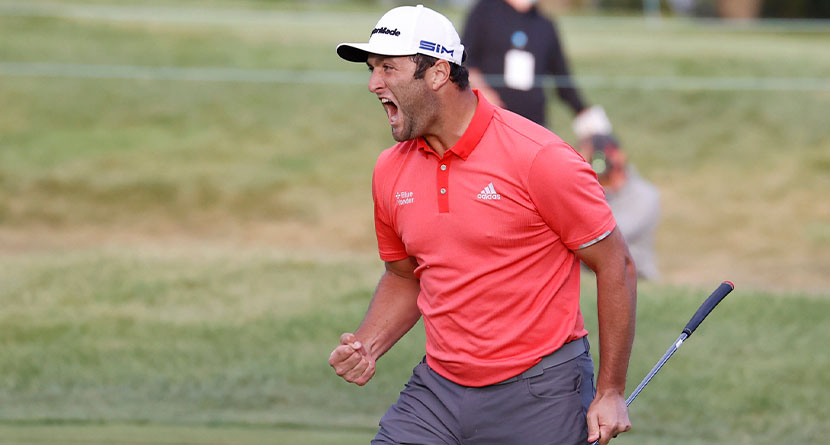 Jon Rahm’s weekend at the FedEx Cup Playoff’s BMW Championship was the stuff of legend — for 35 holes.

After shooting an opening-round 5-over par 75  and a second-round 1-over par 71 that left him seven shots back entering the weekend, Rahm played the final 36 holes of regulation in 10-under par, making 11 birdies against one lone bogey. That lone bogey, however, very nearly became crucially important down the stretch on Sunady.

Playing the fifth hole of his third round, Rahm from 143 yards on the par-4 to the front part of the green, leaving himself 43 feet for birdie. After fixing his ball mark, instead of marking and picking up his ball to hand it over to his caddie for a cleaning, Rahm simply lifted the ball without a mark — a bizarre and boneheaded move that he realized almost instantly.

On the 5th hole during his third round, @JonRahmPGA incurred a one-shot penalty after forgetting to mark his ball on the green and picking it up. 🔊⬆️

That hole would be the only bogey in the lowest round of the week as Rahm went on to shoot a 4-under 66. pic.twitter.com/CXzwKk4nzG

“I really can’t give you an explanation. It’s one of those things that happen in golf. Never thought it would happen in my professional career, but here we are.”

And then Rahm said something that was nearly prophetic.

Fast-forward to Sunday afternoon, and Rahm was once again putting together a brilliant round of golf and jockeying for the lead, all the while, the bizarre penalty hanging over his head. Four birdies on the back nine allowed the No. 2-ranked player in the world to post 4-under par and wait for the final pairings to finish up.

While Rahm was on the range preparing for the possibility of a playoff, he let his mind wander back to Saturday once Dustin Johnson hit the 72nd hole in regulation, giving himself a putt to tie Rahm for the lead.

“I was like, ‘That extra shot cushion would be extremely nice right now, I’m not going to lie,’” Rahm said. “But at the same time, it happened. And I don’t know if I would have won had it not happened.”

Of course, what happened next will go down as some of the best putting the PGA Tour’s 13-year-old playoff series has ever seen.

First, Johnson drained his slick 43-footer for birdie to force the playoff…

“(The penalty) seems like it was so long ago,” Rahm said after the win. “At that point I made bogey there, I was at 4-over par, and a lot of holes to play. Yesterday I was just trying to finish strong and get myself in contention, and once I teed off today with the good weather and how I started striping it the first few holes I knew I had a chance.

“I just tried not to think about it. I had such a good round yesterday and I was so proud of making the six-footer for bogey (on the fifth hole) that it just went right through my mind and focused on the task at hand.”

Rahm went on to say that his mental toughness tightened up following the lapse on Saturday, eventually taking him to a new level of focus that helped to propel him to victory.

“It kind of made me mad at myself, and I just went on with my focus after that and was able to play amazing golf and stayed aggressive,” Rahm said. “I can tell you that after that two-putt, making that 6-footer for bogey, I was like, ‘OK, that’s it. No more playing around, let’s go.’ That’s kind of what mentally did it for me.”

Here’s the starting position for the top 30 at East Lake pic.twitter.com/jFv1g4AFDb

Rahm enters this week’s Tour Championship ranked second in the FedEx Cup standings behind the man he defeated on Sunday. He will start the event at East Lake at 8-under par, two shots behind Johnson.