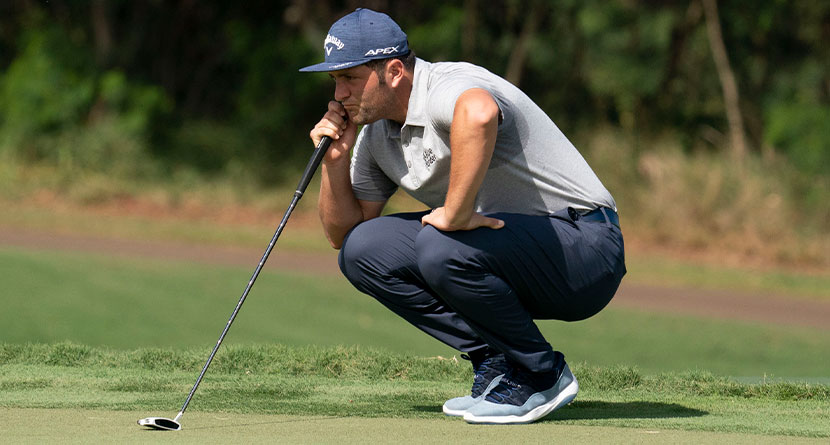 In the lead-up to the first PGA Tour tournament of 2021, the overriding Jon Rahm news item was that the World No. 2 opted to change his equipment, going from TaylorMade to Callaway.

After the week at the Sentry of Tournament of Champions, in which Rahm finished a respectable T7, five shots out of the playoff between Harris English and Joaquin Niemann, fans were talking less about Rahm’s equipment and more about his outburst during the third round.

On the periphery of contention during Saturday’s third round, Rahm left himself five feet for birdie on the par-5 15th hole, the first in the gettable final stretch at the Kapalua Plantation Course.

Missing the birdie try on the high side of the hole, Rahm immediately appeared to believe that a spike mark had caused his ball to miss, frustratingly using his putter to tap down an imperfection on the green.

“What a f—ing… are you kidding me?!” Rahm said as he put his hand to his face. “I mean, argh, it’s so f—ing annoying, honestly. Look at all the metal freaking spikes around the f—ing hole. It’s a joke. It’s a f—ing joke.”

As the broadcast went away from Rahm, host Terry Gannon said cheekily, “Very good microphones out there.”

Of course, Rahm has the option under the modernized Rules of Golf to tap down such imperfections on the green, but his frustration clearly came from the amount of marks left by metal spikes, which a good number of Tour pros still employ.

Anecdotally, between 20-25% of PGA Tour players still wear metal spikes, among them Tiger Woods, Justin Thomas and Bryson DeChambeau. Interestingly enough, DeChambeau played in the group ahead of Rahm on Saturday.