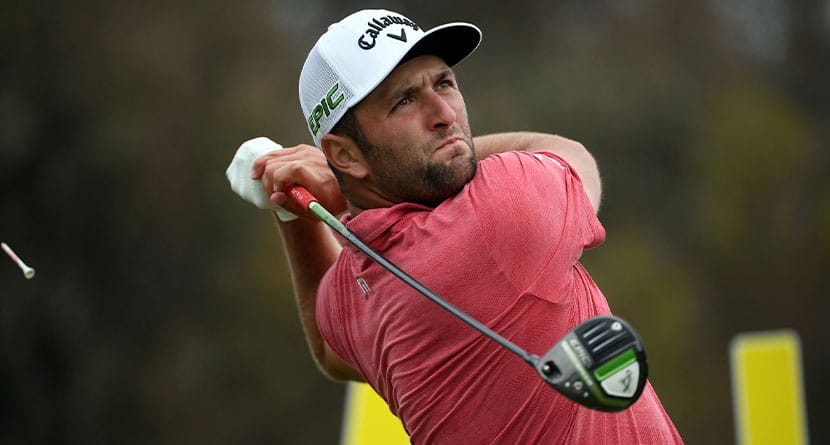 Jon Rahm’s ascension to the top of the golf world has been years in the making, but something only a few people knew until Tuesday at The Open Championship was the physical limitations Rahm has had to overcome to reach golf’s mountaintop.

Meeting with the media at Royal St. George’s, a relatively innocuous question about the prevalence of coaches, trainers and superfluous team members on Tour becoming the norm led Rahm down a path of his personal philosophy as it pertains to his competition weeks.

“I have a team, as well. Just the way I think about it, you do the work at home and then when you come to a tournament it’s time to perform,” Rahm said of his team, primarily his swing coach, Dave Phillips. “If you’re searching for a swing during a major championship week, it’s usually a red flag for me. That’s just the way I choose to do things.

“And it’s also a little bit different for me because I haven’t actively tried to change my swing in over 10 years. I have the swing I have, and I’ve gotten more mobile and stronger in some parts of my swing so that might slightly change it, but I have certain unique parts and certain unique physical limitations that let me swing the way I swing, and I don’t deviate from that.”

The last part about physical limitations piqued at least one media member’s interest and Rahm was asked about how those affected his swing.

“So for people that don’t know, I was born with a clubfoot on my right leg, which means for anybody that’s sensitive about that, my right leg up to the ankle was straight, my foot was 90 degrees turned inside and basically upside down,” Rahm explained. “So when I was born, they pretty much broke every bone in the ankle and I was casted within 20 minutes of being born from the knee down. I think every week I had to go back to the hospital to get recasted, so from knee down my leg didn’t grow at the same rate.

“I have very limited ankle mobility in my right leg. It’s a centimeter and a half shorter, as well. So what I mean by limitations is I didn’t take a full swing because my right ankle doesn’t have the mobility or stability to take it. So I learned at a very young age that I’m going to be more efficient at creating power and be consistent from a short swing. If I take a full to parallel, yeah, it might create more speed, but I have no stability. My ankle just can’t take it.”

Rahm went on to say he also found through various TPI testing that he has some flexion limitations in his wrists, which leads to him bowing his wrists not only in his golf swing, but in any sport he plays.

“So that’s why my swing, I bow my wrist and that’s how I hit it. It’s little things that I think a lot of people can learn. Let your body dictate how you can swing. Simple as that,” Rahm said. “It’s what works for me. I think it’s the biggest lesson I can give any young player. Don’t try to copy me. Don’t try to copy any swing out there. Just swing your swing. Do what you can do. That’s the best thing for yourself.

“I used to not be a good ball striker. Terrible. And slowly, once I started learning in college, I became a good ball striker. Learn from your body. Your body is going to tell you what it can and can’t do. Some things you can improve, some things you can’t. In my case, the right ankle is not going to move any more than it can right now, so that’s the beauty of that.”

Rahm will attempt to swing his swing to his second consecutive major championship joining Ben Hogan (1953), Lee Trevino (1972), Tom Watson (1982) and Tiger Woods (2000) as the only players to have won both the U.S. Open and the Open Championship in the same year.