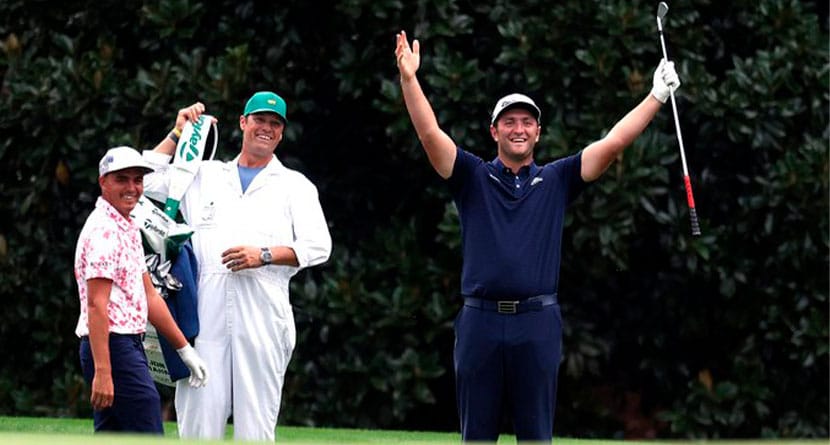 It’s a lifelong battle for most golfers to hit a single hole-in-one, and a second can oftentimes be even more difficult than the first.

That is unless you’re Jon Rahm. If you’re Jon Rahm, you do it on back-to-back days at Augusta National Golf Club, with the second coming on your birthday from the bank of the lake on the famous 16th hole where players attempt to skip the ball across the water and onto the green.

Hole-in-one’s are always special, even more so at Augusta National. Here’s to hoping it happens again later this week! @themasters Thanks to @rickiefowler for the 🎥

As Rickie Fowler captured the moment, Rahm spoke to volunteers while giving some more information about the shot.

“Won’t happen again,” Rahm said after fixing his ball mark and walking towards the fifth tee.

Turns out he was wrong. The next day on the other side of the golf course, Rahm opted to play the skip shot that many of his contemporaries passed on this year with no patrons lining the par-3 16th.

From pond to pin! Rahm skips to a hole-in-one on No. 16 at #themasters

2018 Masters Champion Patrick Reed was on the 15th green when Rahm approached the bank and took a video from an alternative perspective.

As for Rahm, he simply added “Two hole-in-one’s in two days – Happy Birthday to me!”

Rahm goes off as the third betting favorite behind only Bryson DeChambeau (8/1) and Dustin Johnson (9/1) at 10/1 to win the green jacket.

He will begin his quest for his first major championship at 7:33 a.m. EST on the 10th hole on Thursday alongside the aforementioned DeChambeau and Louis Oosthuizen.