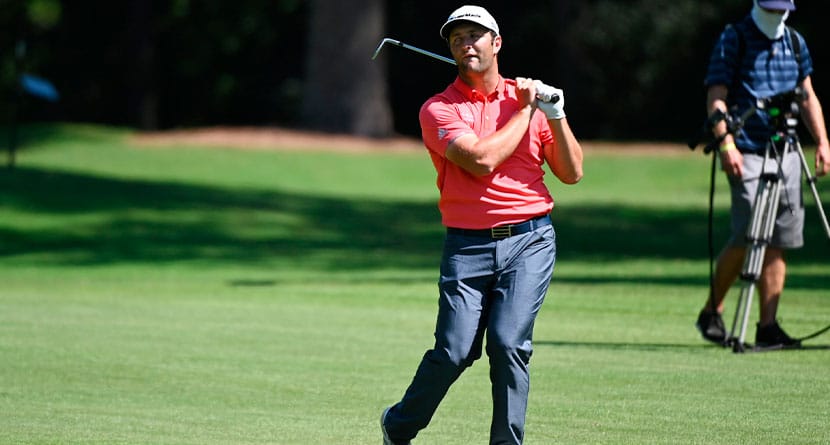 There’s something oddly satisfying about seeing the best players in the world hit shots that wouldn’t seem out of place in your weekly game.

And on Thursday at the Zozo Championship at Sherwood Country Club, World No. 2 Jon Rahm hit an approach shot that wouldn’t make a 20-handicap jealous.

Getting off to a strong start, Rahm found himself 3-under par through his first eight holes, but playing the 18th at Sherwood (he started on the 10th), Rahm hit a hosel rocket for the ages, sending a 172-yard approach shot 156 yards into a hazard.

Unlike your weekly game, however, Rahm was able to manage a bogey on the hole, getting up-and-down drop the 67-yard drop area.

nobody hits a pure cold shank like Jon Rahm. NOBODY pic.twitter.com/kjZ5FzbKZe

He would go on to erase the mistake on his back side, carding two more birdies to post a first-round score of 4-under par 68, which put him in a tie for 17th place after round one.

Things weren’t as easily redeemable for another top-5 player in the world, however.

Ironically, McIlroy had his own issues with the 18th hole at Sherwood C.C. After hitting a drive way off line, McIlroy played over some trees back into the fairway, but his attempt to get up-and-down to save par wasn’t his best.

Faced with 135 yards to the pin, McIlroy flared a wedge short and right of the green resulting in one of the more casual club snaps you’ll ever see.