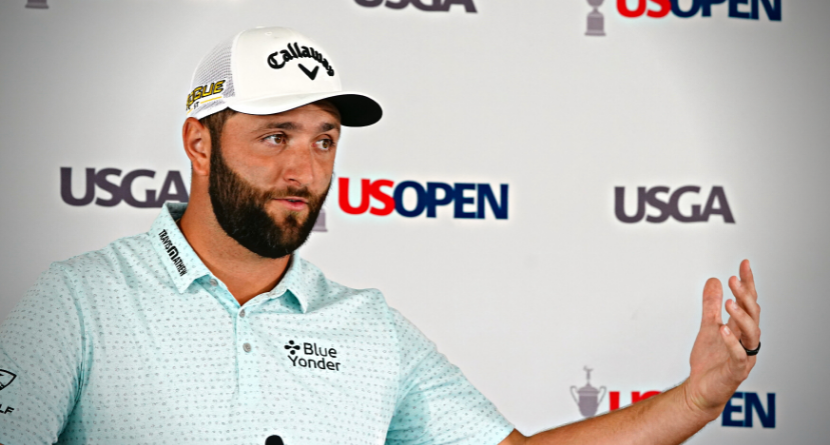 This time last year, Jon Rahm was recovering from an especially ill-timed COVID case and getting ready to embark on a legacy-altering week in Southern California.

So it speaks to how far we’ve plunged into the depths of pro golf weirdness since the 27-year-old’s U.S. Open triumph at Torrey Pines that the pandemic now registers as the lesser of two crises that have plagued the tenure of the PGA Tour’s beleaguered commissioner.

“I feel for Jay Monahan,” Rahm said Tuesday. “If you see his time as a commissioner, he had to deal with COVID and now this. I don’t know if he signed up for all this or not.”

The “this” Rahm refers to is, of course, the LIV Golf Series.

The Spaniard long ago cast his lot with Team PGA Tour, along with other stars of the current product such as Rory McIlroy, Justin Thomas and Collin Morikawa. Nevertheless, the questions persist, affording Rahm a chance to reaffirm his stance Tuesday — and toss in a dig at the unconventional format the rebel circuit’s participants keep touting as revolutionary.

“I consider the PGA Tour has done an amazing job giving us the best platform for us to perform,” Rahm said. “I do see the appeal that other people see towards the LIV Golf. I do see some of the – I’ll put this delicately – points or arguments they can make towards why they prefer it. To be honest, part of the [LIV] format is not really appealing to me. Shotgun three days to me is not a golf tournament, no cut. It’s that simple. I want to play against the best in the world in a format that’s been going on for hundreds of years. That’s what I want to see.”

And as for the astronomical sums of Saudi sportswashing dollars being lavished on the deserters?

“Will our lifestyle change if I got $400 million? No, it will not change one bit,” Rahm said. “Truth be told, I could retire right now with what I’ve made and live a very happy life and not play golf again. So I’ve never really played the game of golf for monetary reasons. I play for the love of the game, and I want to play against the best in the world. I’ve always been interested in history and legacy, and right now the PGA Tour has that.

When he was asked about what will become of the legacy of his countryman, Sergio Garcia, Rahm lamented the rebel circuit’s ramifications on the Ryder Cup.

“Sergio, in my mind, even if he’s not breaking 90, is a no-brainer pick,” Rahm said. “I think the Ryder Cup is the biggest attraction the game of golf has to bring new people in. I hope we don’t lose the essence and the aspect that the Ryder Cup is. That’s one of my biggest concerns, to be honest. It’s an event we all play for free, and it’s one of our favorite weeks, win or lose. I think that says a lot about the game and where I wish it would be at.”