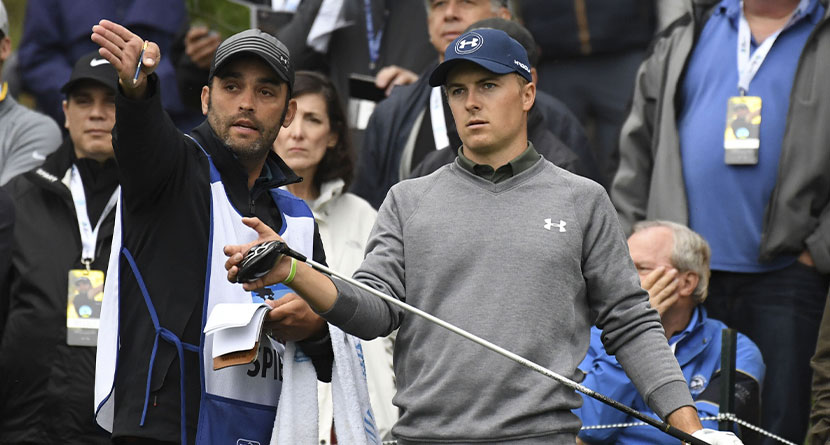 Jordan Spieth has proven himself to be one of the more candid players on the PGA Tour.

Joining the NoLayingUp podcast last week ahead of the AT&T Byron Nelson was just the latest in a line of very insightful interviews that Spieth has given over the past few years as he dealt with struggles and injuries all while being one of the most popular and scrutinized players on the planet.

While the entire hour-long interview is a great listen, one revelation, in particular, made headlines after its release. During a rapid-fire wrap-up, NLU’s Chris Solomon asked Spieth what his most embarrassing on-course moment was.

Interestingly, Spieth had an answer right off the top of his head, and it had very little to do with the way he hit a shot. Spieth harkened back to the 2019 U.S. Open at Pebble Beach that had to do with an interaction with his longtime caddie Michael Greller.

Spieth routinely plays in the AT&T Pebble Beach Pro-Am in the early portion of the year, which gave he and Greller an idea of club selection off many of the holes. At the U.S. Open in June, however, the course was playing firmer and faster, meaning the normal tee shot off the par-4 8th hole required a different club.

Normally, Spieth said he hits a hybrid off the tee without fear of the cliff and penalty area through the fairway, but the different conditions allowed for him to hit what he thought would be a safe 4-iron.

Taking a drop and again consulting Greller, Spieth asked his looper about the club selection.

“I hit an 8-iron, which I was like, ‘Hey, we can’t go over this green, this is a good club, right?’” Spieth remembers. “And again, both of these, I’m hitting the shot, I know the information, I know I don’t have to rip him, I’m trying to force it a little bit. And I end up making like a double or a triple and I kind went off on Michael and it all got caught on camera and microphone.”

Jordan Spieth just completely called out his caddie on national TV. Whether the caddie misjudged it or not, that’s a bush league move. At the end of the day, you’re the one hitting the golf ball.#USOpen pic.twitter.com/lFSYQSGrvR

“Two perfect shots, Michael,” Spieth said in the clip from the U.S. Open. “You got me in the water on one and over the green on the other.”

The moment went viral, and for Spieth, it was for all the wrong reasons.

“After that round, I saw it and I had never been more embarrassed for myself, ever,” Spieth told NLU. “I was like, ‘Wow. Not only does that look bad, it was bad.’ And boy, I was upset but that was just — that was awful.”

The mistaken venting was compounded a few months later when it was replayed at an event Spieth and Greller attended.

“Actually, later that year in China they always do the Caddie of the Year, they have a big dinner spread, the caddies are all drinking and it’s really fun, they get a comedian to come do it and it’s a great time,” Spieth said. “And they brought up, ‘Some caddies had good years and some took abuse.’ And they played that clip and I was in the back of the room and I’m like, ‘Oh, my God.’ I grabbed a beer and left. I couldn’t watch this again.”

For Spieth, it was a learning experience and one he said that he spoke to Greller about in the days and months that passed. And now that Spieth seems to be back on top of his game, the interesting caddie-player dynamic is back in full view with a more accountable tone from Spieth.

“It’s on me.”@JordanSpieth had to do some convincing to get caddie Michael Greller on board with the shot. pic.twitter.com/ogvDWDKHyo

Check out the full podcast interview with Spieth at the link below.

Ahead of this week’s @ATT Byron Nelson, @JordanSpieth joins to chat about his journey back, the work he put into to get back into form, sticking with his team, his most embarrassing moment on a golf course, and more. #ATTByronNelson #ATTInfluencer