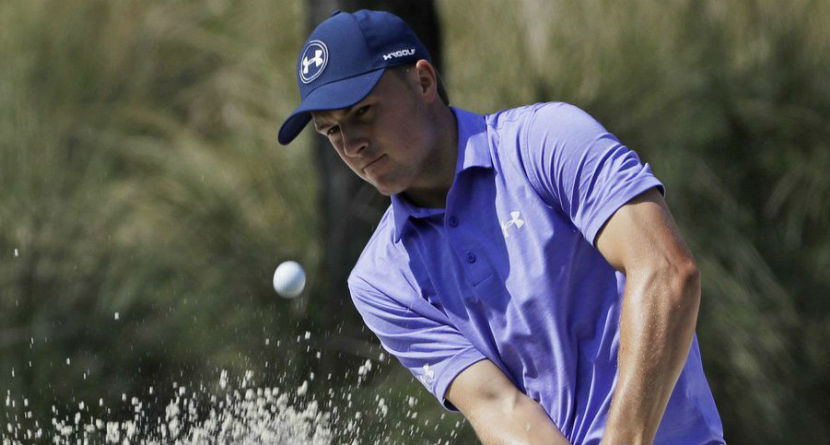 Tour pro’s don’t ordinarily take their phones out during competitive rounds unless, apparently, they’re not happy with the sand in a bunker. On Thursday during the first round of the Players Championship, Jordan Spieth found the greenside trap on the par-4 first hole at TPC Sawgrass, his 10th of the day.

As soon as he saw his lie, he grabbed his phone out of his bag to snap a picture for evidence of what he later what he deemed to be a poor rake job which led to a double bogey six.

“It was a bunker that was raked to where it just kind of looked like somebody didn’t really care much to do it or were rushing off the green,” Spieth said, according to an ESPN report. “I was in worse than a plugged lie when (the ball) had just trickled in it.

“And I overreacted probably a bit, but you just don’t see that very often, and I know my guy, Michael (Greller) rakes and makes sure that it’s exactly the way it was when he went in there, so if you hit it in the bunker, everybody gets the same kind of thing.

“Guys are very good 99.9 percent of the time and that was very frustrating, because I knew where I was, from a normal lie, it wasn’t too bad; and from that lie I had no chance,” Spieth added. “So it was a frustrating time in the round there where I was trying to kind of get some momentum going.”

Spieth ended up splashing out of the sand to 45 feet and then three-putted from there. He shot a one-over par 73 and finds himself close to the cut line after day one.