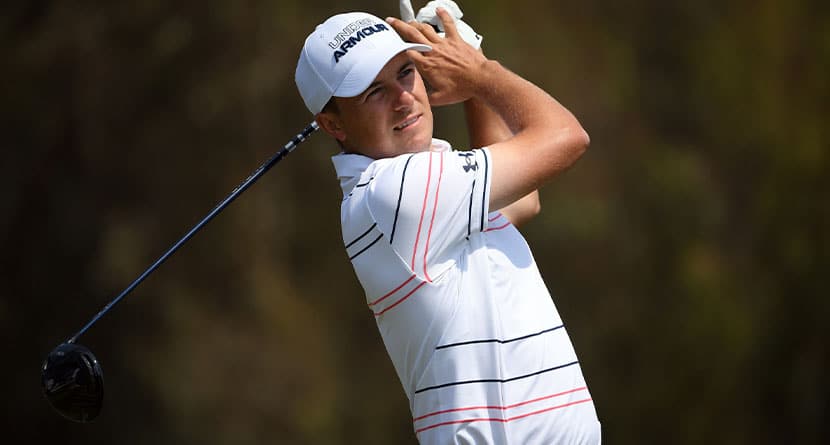 Jordan Spieth may not have had his best stuff this past weekend at the U.S. Open, but you have to admire his grit and determination to fight back and post a top-20 finish after opening the championship with a 6-over par 77.

What you may not admire, however, is the way in which he warmed up for his final round on Sunday.

Following rounds of 69-68 on Friday and Saturday, Spieth had clawed back to within six shots of the lead before teeing off in the final round. That’s when Sky Sports cameras zeroed in on Spieth on the range.

While the whole ordeal seemed to lack frustration, there’s no doubt that it was bad optics for Spieth who hacked away at the turf nine times before his caddie, Michael Greller, took another 20 swipes at the ground.

The video and commentary shed some light on an issue seemingly many of the players dealt with during the week at Torrey Pines.

“This turf is frustrating players on the range,” Brad Faxon said. “(Pete) Cowen said it to me yesterday. Rory (McIlroy) said it’s really hard to hit iron shots here and he’s surprised nobody’s torn a ligament or broken a wrist.”

Faxon and the rest of the Sky Sports commentary team continued to watch and note that the goal appeared to be removing the turf in order to stop his club from getting stuck into the grass.

Spieth recently revealed that much of his struggles over the past few years developed in part due to a wrist injury that he attempted to play through.

“I didn’t think there was a huge deal with it,” Spieth said at the Dell Match Play, which had been revealed to be a bone chip. “If I taped it up, it didn’t feel so bad, so I just—you know, I went out each day trying to play the best golf I could play.

“As the year went on my grip got weaker, the clubface got more open and then I needed to flip at impact and so it just required more timing. From somebody who already has kind of a weaker grip to start with, you don’t really have much wiggle room on that side of the things. And so it’s something that I’ve got to continue to try and work on and make sure it’s not an issue.

“It was 100 percent responsible for me not being able to strengthen my grip, which in turn then is probably normally the first thing guys go to, if something gets a little bit off is, all right, where in my setup are things different. And if that’s one of the things, that’s going to impact how everything feels.”

While it probably wasn’t the best visual for Spieth, there seemed to be a method and reason behind his hacking at the turf, but that doesn’t mean that the Torrey Pines greens staff will be any happier about it.