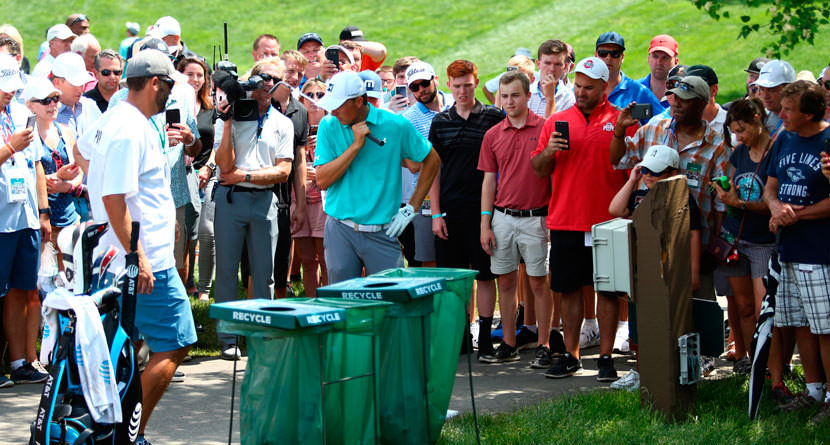 The allure of going to professional golf events is getting up close and personal with the best players in the world and being able to see them ply their trade in person as opposed to on television. However, more and more, fans who are closest to those players aren’t watching the shot unfold in front of them. Instead, they are watching the players and the shots through the lens of their smartphones.

Maybe this is an indication that I’m just getting old, but it makes zero sense to me that people want to use their phones to watch Tiger (or anyone) hit a golf shot.

There are professionals on the ground who take pictures so much better than you. Enjoy the moment FFS. pic.twitter.com/iuhT81WcVA

On Thursday at Memorial, Jordan Spieth was in the midst of a mini-meltdown after starting his round 2-under par through five holes. Coming off of a double bogey on the par-4 sixth hole and a par on the par-5 seventh, Spieth was running a little hot when he airmailed the green at the par-3 eighth hole.


After taking relief from a cart path, Spieth turned to the crowd and in an exasperated tone pleaded with them to turn their phones off or put them on silent during his next shot.

“If everybody could do me a huge favor and not video this shot,” Spieth said. “Thank you. Sometimes it’s cool to actually watch. Please, no phones. Can’t have any going off in this shot.”

While no phones went off during the shot, Spieth still came up short of the green. He was unable to get up-and-down from 10 yards off the green and recorded a second double bogey in three holes.

Spieth would go on to shoot a 3-over par 75 leaving him 10 shots behind first-round co-leaders Hideki Matsuyama, Abraham Ancer and Joaquin Niemann.