Spieth, Morikawa Caught On Hot Mic After Hitting Into Sabbatini 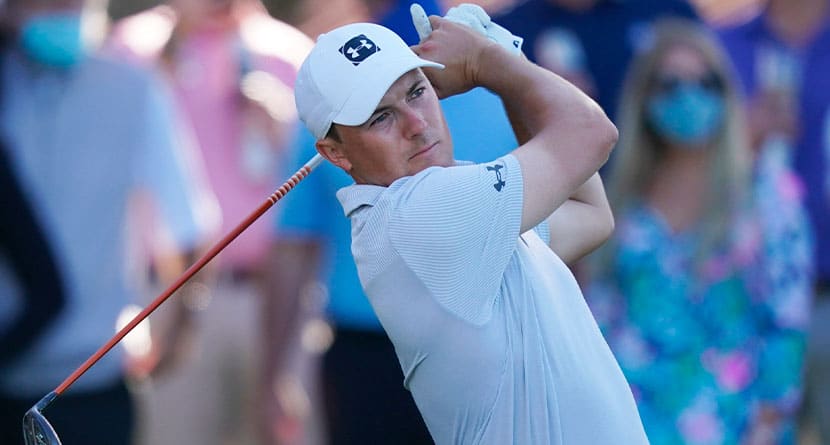 The PGA Tour’s flagship event, The Players Championship, debuted their “Every Shot Live” platform last year at the 2020 event, but didn’t get to see it through to fruition due to the onset of the COVID-19 pandemic.

With another year under their collective belts, the Tour was able to put out a fantastic product that allowed subscribers to NBC Sports Gold to watch the entire round of any player in the field sans commentary, a great addition to their digital coverage.

However, the lack of editorial oversight that is to be expected with such a large undertaking allowed for one of the more memorable moments of the weekend to play out in the middle of Jordan Spieth’s round on Saturday at TPC Sawgrass.

Playing alongside Collin Morikawa, Spieth teed off the par-5 11th hole without realizing that the group ahead of him — Rory Sabbatini and Brendan Steele — were waiting for the green to clear in an attempt to get home in two.

The drive went well right of the fairway, eliciting a “FORE RIGHT” from the group on the tee, but with Sabbatini waiting on the right side of the fairway within striking distance, a ricochet from off a tree understandably caught him off guard.

Intrepid Twitter user Joe Chambers was able to take the incident and splice them together using the “Every Shot Live” portal. What resulted was a funny back-and-forth between Spieth and Morikawa about Sabbatini, one of the Tour’s most well-documented curmudgeons, on a hot mic near the tee box.

“I saw the caddie and thought it was a forecaddie,” Spieth explained initially. “Is that Sabbatini? God, I couldn’t pick a worse person to hit into.”

“We haven’t seen anybody (ahead of us) all day though,” Spieth said. “Look how pissed he is. I’m the reason that he hit a bad shot. The good news is that he likes me. I’m one of the few people that he likes.”

Morikawa took over from there, relaying a conversation he had with Sabbatini earlier in the week about his girlfriend, Kat.

And with that, they moved on to the rest of their round, but not before the entire thing went viral.

GolfDigest.com’s Christopher Powers caught up with Spieth after the round and asked him about the incident.

“If I had to choose guys to hit into, he wouldn’t be one of them,” Spieth said. “I’ll apologize when I see him. I hit a tree right by him, so it couldn’t have been a good feeling.”