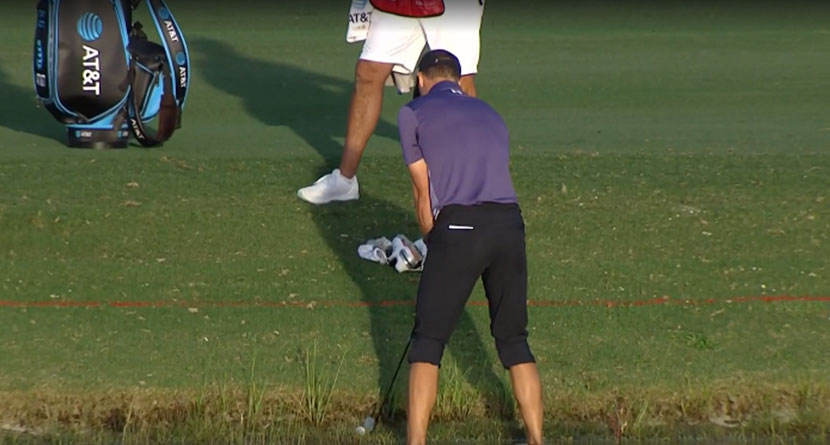 Jordan Spieth’s opening round of the Hero World Challenge wasn’t going as well as he would have liked when he reached the 18th tee box at Albany Golf Course.

Coming off a bogey on the par-3 17th hole, the new father found himself on the bottom half of the 20-man leaderboard, perhaps pressing a bit on his way into the clubhouse. Spieth tugged his tee shot left, barely finding the penalty area that guarded the fairway.

Once he and trusty caddie Michael Greller arrived, alongside playing partner Bryson DeChambeau, the conversation was already in full swing when Golf Channel cameras picked up Spieth standing on the embankment leading to the water sans shoes and socks.

“I was just thinking of trying to thin-cut it out there, at the middle of the green,” Spieth said.

“Is the lie fine?” Greller asked.

Getting back into the water, Spieth noticed another golf ball near his, wondering aloud if he could move it. Greller said he didn’t believe he could, but suggested to call in an official anyway, which they did.

While PGA Tour rules official Gary Young made his way to the scene, the player-caddie conversation continued, centering around the prudent play and the aggressive play.

Greller, with Spieth eyeing something heroic: “If you were -6, would you hit this shot or … [points other direction]?”

Young arrived and informed Spieth that the other ball in the penalty area is treated as an outside influence, and he could remove it, which Spieth did. From there, it was up to Spieth to pull off the shot.

Ditching the shoes and socks.@JordanSpieth rolled up the pants for this shot. pic.twitter.com/7tnUBIF17Q

The shot came out how Spieth expected, and the 143 yards to cover the front of the green was never in jeopardy. Spieth’s approach trickled over the back of the putting surface, short of a bunker, leaving him a good distance away for birdie, but near the green.

Unfortunately for Spieth fans, the three-time major winner was unable to get up-and-down to save par, settling for a bogey and a 1-under par round of 71 that left him five back of 18-hole co-leaders Rory McIlroy, Daniel Berger and Abraham Ancer.

The good news for Spieth is that despite only beating two players in the field, he’s still guaranteed a six-figure payday. He’ll look to make up for the mistakes down the stretch on Friday, teeing off alongside Justin Rose in the second round at 11:06 a.m. EST.