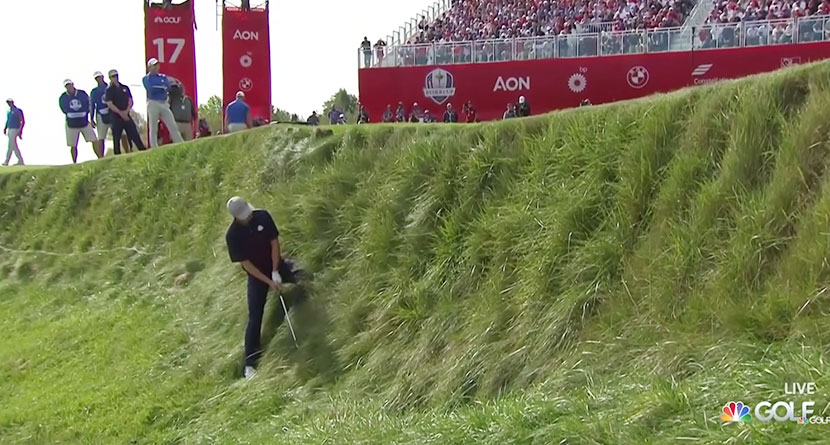 The Ryder Cup had barely begun on Friday morning by the time the shot of the event was struck.

Playing in the first match of the 2020 Ryder Cup 12 months after it was scheduled to be played, Jordan Spieth and Justin Thomas took on the new-age “Spanish Armada,” Jon Rahm and Sergio Garcia.

Fighting down the stretch in Friday foursomes to scratch out a half point, Thomas missed the par-3 17th green, leaving his partner with a nearly-impossible shot on the side of a bulkhead that only could have been dreamed up by Pete Dye.

With Europe on the surface with a birdie look, it was do-or-die for Spieth who pulled off an unthinkable shot.

Here’s another look, with shot tracer added in.

Add another one to the archives. pic.twitter.com/zrM91u8L19

Spieth sped back down the hill towards Lake Michigan, trying to find a safe area to stop his momentum before he ran out of land.

“I don’t think I exaggerated that fall,” Spieth said after the match. “You know how steep that is. But once I started moving, I was like, ‘I’ve got to keep moving until I find a flat spot.’ It’s kind of one of those shots that you practice as a kid for fun, and you don’t ultimately want to have it.

“The chances of it going there — you could roll a thousand balls off the green, and it’s not going to stay where it was. I hit like a 52-degree because a 60 might have gone over the back of my head. I just tried to flick it right underneath and hit it as hard as I could and as high as I could.”

The shot worked out, but Thomas was unable to convert the putt, allowing Spain to two-putt to halve the hole and win the match 2&1.