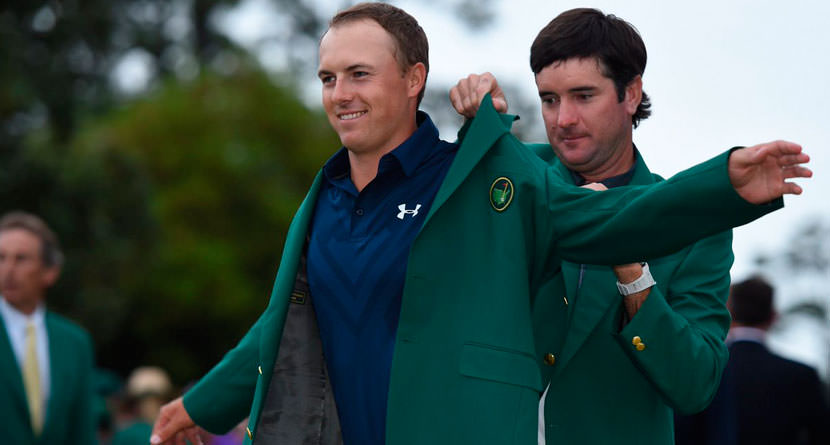 The next major championship in men’s professional golf is 118 days away, but with the 2017 all but wrapped up, minds inevitably pivot towards Augusta National in the spring. Luckily for 2015 Masters Champion Jordan Spieth, he has four months to find himself a quality tailor to adjust his oversized green jacket.

Anyone know a good tailor? https://t.co/XYv5GYI8U0

Speaking with the Associated Press’ Doug Ferguson, Spieth revealed that he was so protective of his favorite piece of formal wear that he didn’t trust to an outside entity to tighten up the specs.

Jordan Spieth doesn’t know his jacket size. He only knows one of the jackets he owns — a green one — is too big.

“I never got it tailored, so it’s huge,” Spieth said of his green jacket from winning the 2015 Masters. “I never trusted anybody, never wanted anyone to go do it. I didn’t give them my size originally. I wore the one off the green that day, and I never gave it back to them to tailor or anything. I should now.”

Asked for his jacket size, Spieth wasn’t sure, only that it was somewhere around a 40.

There’s a reason he doesn’t know. Spieth doesn’t own a lot of jackets. He did get a couple of them before the Presidents Cup, and he put it on the tab of Justin Thomas.

“I bought two suits on Justin’s Polo account … and that’s the only nice clothes that I’ve ever bought,” Spieth said. “I bought two suits and the shoes and sweaters and whatnot because he got a discount. So I got some really nice stuff.”

What did Thomas get out of the deal?

“I asked him if he wanted any underwear in return or something,” Spieth said with a smile.

One of his top sponsors is Under Armour.

We can add a few things to Jordan Spieth’s résumé thanks to that story: champion golfer, fitted formal wear foe, bargain shopper.