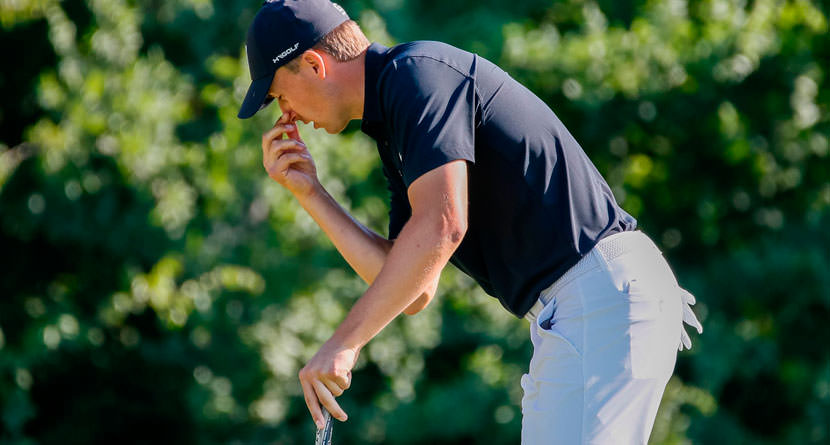 By practically all accounts, Jordan Spieth has proven himself to be a generational player. At just 23 years of age, the Texan has won three major championships and 11 times on the PGA Tour. If he were to hang up the soft spikes tomorrow, he’d be a sure-fire Hall of Famer.

Much of what has led Spieth to this already-great career can be attributed to his incredible short game. Spieth’s work with his now-famous rusted Scotty Cameron putter has been well documented, but fans of Spieth have seen a noticeable decline in his prowess on the short grass in the past few months.

Despite Spieth’s stellar performance on Friday at Trinity Forest in the AT&T Byron Nelson in which he shot a 5-under par 66, a short miss on the par-4 15th is what the round is being remembered for.


Facing a 22-foot putt for birdie on his sixth hole of the day, Spieth ran his putt 15 inches by the cup and then did this…

It can happen to anyone. pic.twitter.com/PhiEoXg32w

In a testament to his grit and determination, Spieth bounced back with a birdie on the very next hole and all he did from the 15th hole on in is shoot 6-under par, which included birdies on six of eight holes over a stretch on the front nine.

“I putted a lot better today as far as the way it looked and it was really frustrating to (have the) kind of laziness to miss a tap-in,” Spieth said.  “And on the last hole, just to not wait until I felt comfortable with kind of the breeze off my back, I just pulled it and so obviously really frustrated, missed two putts, one inside a foot, one inside of three feet with all the progress I made in my putting.”

Spieth ended his day with a bogey on the par-4 9th after missing a putt from 2 feet, 9 inches. Incredibly, his strokes gained: putting stats for the day were positive, picking up 0.192 strokes on the field.

What a peculiar day for Jordan Spieth. pic.twitter.com/dHNCIiubrc

Spieth sits eight shots back of 36-hole leader Marc Leishman who followed up his 10-under par 61 on Thursday with a 5-under par 66 on Friday. The big Aussie is one clear of Aaron Wise and two shots ahead of Brian Gay heading into the weekend.

Here are the complete second round highlights.